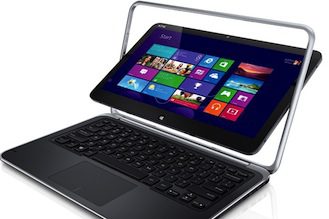 Dell this week took a backseat to frontrunners Lenovo and Hewlett-Packard, each of which was pleased to see it had out-muscled the other during the year’s third quarter. Gartner found Lenovo to have finally ousted HP from the global No. 1 spot, after several quarters of closing in on it, while IDC’s data put HP ahead of Lenovo by a fraction.

Both firms agreed that Dell had placed third, while losing market share at a pace outdone only by HP, and that overall buyers had put off purchases of PCs in anticipation of Microsoft’s Oct. 26 launch of Windows 8.

On Oct. 12, Dell did something to partly address both points: It announced that four PCs running Windows 8 are now available for pre-order, and that it will make Windows 8 an option on its current XPS, Inspiron, Latitude, OptiPlex and Precision brands.

“Dell and Microsoft have strived to make technology more accessible and intuitive for more than two decades, and the introduction of new Dell PCs and Windows 8 software is another important milestone in this journey,” Sam Burd, vice president of Dell’s PC Product Group, said in a statement.

The XPS 12 is the first of the four now available for pre-order. Unveiled at the IFA 2012 trade show in Berlin Aug. 30, it’s a tablet hybrid with an unusual architecture. Instead of a display that disconnects from the keyboard, or twists and lays down over the keys—routes Lenovo has taken—it features what Dell calls a “flip hinge,” which in the most basic of terms enables the display’s aluminum frame to stay put while the glass inside it spins.

The second is the XPS One 27, an all-in-one with a 27-inch Wide Quad HD display that has “78 percent more pixels than a full HD display,” according to Dell, and a stand that enables the display to tilt to a 60-degree angle for better viewing. It’s now available with a touch-screen—necessary for taking full advantage of the touch-centric Windows 8.

Third is the Inspiron One 23; another all-in-one, it features a 23-inch display and a space-saving design, and along with Windows 8 now also has a touch-screen.

Finally, “in time for the holidays,” Dell has upgraded its XPS 13, an Ultrabook with a 13.3-inch Gorilla Glass display, Intel Rapid Start and Smart Connect technologies and a weight just under 3 pounds. Among the upgrades are a move to Intel’s Ivy Bridge chipset, making the XPS 13 now two times faster than previous generations.

While the Inspiron line is geared toward consumers and students, Dell suggests that its XPS brand has a “growing reputation as the best product for users and IT departments to navigate the bring-your-own-device (BYOD) landscape.”