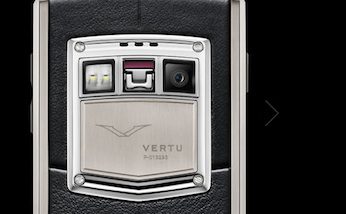 As Nokia works to court developing markets with its new Asha 310, one of the least-expensive dual-SIM smartphones ever made, its former-brand Vertu is working to woo those on the far opposite end of the user spectrum. Its newest smartphone, the Vertu TI, retails for about $10,500.

The TI is constructed of Grade 5 titanium, black leather, polished black ceramic and precious gems, and looks as though it was designed by Cadillac.

Nokia, in need of cash to back its Windows Phone efforts, in June 2012 sold 90 percent of the high-end Vertu line to EQT VI, part of a private equity group in Northern Europe.

“This is a logical next step in the evolution of Vertu as the world leader in luxury mobile products,” Vertu President Perry Oosting said in a statement at the time.

Another logical step, apparently, was to ditch the Symbian platform, as Nokia also has. But while Nokia put its eggs into Microsoft’s Windows Phone basket, Vertu instead opted for Google’s Android 4.0 to power the TI.

Each TI is handmade by a single craftsman in England and bears the craftsman’s signature. A Vertu Key at the top of the device includes a ruby in its design, and the phone’s 3.7-inch screen—the largest on a Vertu device to date—is made of sapphire crystal and said to be both “virtually scratchproof” and four times stronger than the average screen.

The TI’s Titanium casing is said to be five times stronger than most smartphone cases, while also lightweight—though the first claim is surely more accurate than the second. The lightest version of the T1 weighs 6.4 ounces, while the Samsung Galaxy S III, by contrast, weighs 4.7 ounces and the Apple iPhone 5 weighs 3.9 ounces.

The TI measures 2.3 by 5.1 by 0.5 inches, features an 8-megapixel camera on the back, a 1.3-megapixel camera up-front, a 1.7GHz processor, an audio experience designed by experts at Bang & Olufson and—did we mention?—a concierge service.

With a press of that ruby Vertu Key, users are provided “instant access to a curated world of benefits and services and a team of people available to the customer, 24/7 wherever they may be,” Vertu says on its site.

The Concierge service can also deliver briefings on 150 global destinations, “independently written with you in mind,” and invitations to “experiences and exclusive events.”

While Nokia is hustling to save every dime it can and keep its business in the black, The Wall Street Journal reports that Vertu—which has about 1,000 employees and 470 retail points around the globe—increased sales in 2012 to roughly $400 million, up from 2011’s $355 million.

With its 10 percent share, Nokia may want to steal a marketing phrase and tell potential buyers to go ahead, they’re worth it. Vertu instead tells them: “Nothing will ever feel the same.”