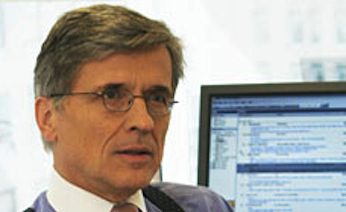 Tom Wheeler, President Obama’s nominee to chair the Federal Communications Commission (FCC), has fingers in pies throughout the mobile communications industry, which he’s said he’s willing to remove if the Senate confirms him for the position.

The report said that if he is confirmed, Wheeler will also resign from the board of Earthlink, resign from his position as managing director of venture-capital firm Core Capital Partners and close his consulting firm, Shiloh Group.

Wheeler also reported income, it added, of more than $1.1 million from a combination of salary, consulting fees and positions on the boards of several companies.

President Obama, nominating Wheeler May 1, called him “the Bo Jackson of telecom.”

“Tom knows this stuff inside and out,” said Obama.

Gigi Sohn, president and CEO of consumer advocacy group Public Knowledge, has applauded Wheeler’s nomination, saying that as a person who has known him for many years, she expects he’ll be an “independent” and “proactive” chairman.

“Some have expressed concern about Tom’s past history as the head of two industry trade associations. But his past positions should be seen in light of the times and in the context of his other important experiences and engagement with policy,” Sohn said in an April 30 blog post that anticipated the nomination.

“I have no doubt that we will disagree with Tom at times. But I also have no doubt that Tom will have an open door and an open mind,” Sohn continued, “and that ultimately his decisions will be based on what he genuinely believes is best for the public interest, not any particular industry.”

In its May 1 statement, the TIA also pointed out the major, looming event-slash-headache on the FCC calendar—the spectrum auctions scheduled for 2014.

“Given that one of the most important challenges facing the FCC will be assuring a successful television spectrum incentive auction, Wheeler’s breadth of experience makes him especially well-suited to lead the FCC at this time,” said the TIA.

On March 22, then-Chairman Julius Genachowki announced his intention to step down from his post and insisted that while much had been accomplished on his watch, the FCC “can’t let up on the gas pedal.”

Until Wheeler is confirmed by the Senate, FCC Commissioner Mignon Clyburn has been assigned to keep the Commission speeding ahead. The appointment makes her the first woman to, however briefly, head the FCC.

Accepting the appointment, Clyburn said she planned to work “hand-in-hand with every bureau and office” and that she is “committed to continuing the FCC’s strong record of promoting competition, investment and advancing the public interest.”