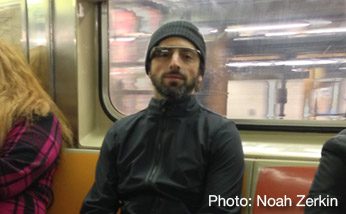 Google Glass has yet to become available but it already has some competition, according to reports.

Referred to in-house as “Baidu Eye,” it consists of a headset and a small LCD screen.

“What you are doing with your camera, for example, taking a picture of a celebrity and then checking on our database to see if we have a facial image match, you could do the same thing with a wearable visual device,” said Kuo, according to the report.

Topeka Capital Markets analyst Brian White said in an April 4 research note that he believes Microsoft is also developing a Glass competitor, Apple Insider reported the same day. White expects Microsoft will introduce its version in the first half of 2014.

White added that he believes Google Glass will serve as a “major push” into the wearable electronics space.

Wearables have been discussed for more than a decade, but Glass and other expected, or rumored, devices suggest that in the next few years they’ll truly enter the mainstream.

In February, Bloomberg reported that Apple has 100 product designers “working on a wrist watch-like device that may perform some of the tasks now handled by the iPhone and iPad.”

A week later, Apple Insider discovered a patent Apple filed for with the U.S. Patent and Trademark Office in August 2011 for a device that would behave like a “slap bracelet”—bracelets that can be snapped stiff but then, with a gentle whack, wrapped around the wearer’s wrist.

“The display would be overlaid with an adhesive over one side of the bracelet, while the device’s logic board, battery and other parts are mounted to one end,” Apple Insider reported. “By positioning the components in this manner, the bracelet would cover the vital electronics module when it is being worn.”

Samsung has similarly shown off bendable displays that it’s expected will be used in a bracelet cuff-like design. At the 2013 Consumer Electronics Show, Samsung introduced a new brand called Youm and said that it “doesn’t just bend the rules of display technologies, it rewrites them.”

Back in 2010 Nokia filed a similar patent for a phone that could be bent three ways—like a soup can, into an open C or like a little an A-frame tent. The phone would understand certain instructions in the way its shape is changed; unrolling it, for example, might accept an incoming call.

Beside a possible iWatch, Apple is now said to be working on an “iRing,” an accessory that would act as a controller to complement Apple’s rumored iTV and iWatch. Topeka Capital’s White said in a research note this week that the iRing would enhance “the motion-detection experience” with the iTV and negate “some of the functionality found in a remote.”

RNR Research has said it expects wearable computers to be “one of the next frontiers” in information and communications technology (ICT) and to represent a market opportunity for the semiconductor industry, M2M companies, app developers, wireless communications companies and of course consumer brands like Apple, Google and Microsoft.

ABI Research, expecting the wearables market to grow over the next five years, is expecting annual device shipments to reach 485 million units by 2018.

ABI estimates that 61 percent of the wearables market currently centers on sports watches or activity trackers, but this year smart watches will begin to emerge and later in the year “smart glasses will take the stage.”