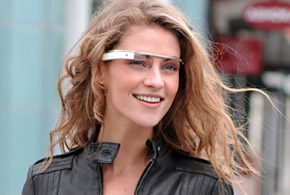 Google Glass just got another cool collection of new capabilities, including the ability to take a photograph with only a wink of a user’s eye.

The updates, which also include the arrival of Google+ Hangouts for Glass and easy sharing of Glass-shot videos onto YouTube, were unveiled in a Dec. 17 post on the Glass+ page.

“You’ve shared your wishes, we’ve made our list and checked it twice, and now we’re closing out 2013 with some of your most popular requests,” the Glass team states in the post. Among the other new features are a screen lock for Glass to prevent unauthorized users from operating the devices, a new iOS app for iPhone fans and improved features for using Glass with Google Play Music All Access subscribers.

Topping the list for coolness, however, has to be the new wink feature.

“Glass is about helping you look up and experience the world around you without getting bogged down by technology,” the post states. “Based on this philosophy, we’ve got a new setting that lets you quickly and easily capture the moments you care about with a simple wink of the eye. Whether it’s capturing an amazing sunset on an evening walk, or photographing your receipt for the lunch you’ll need to expense, you can now stay in the moment and wink to take a picture instantly. If you want to turn it on, just swipe over to Settings.”

And while the new photo capturing capability is cool, there’s still more to come for wink, according to the post. “We’re starting with pictures, but just think about what else is possible. Imagine a day where you’re riding in the back of a cab and you just wink at the meter to pay. You wink at a pair of shoes in a shop window and your size is shipped to your door. You wink at a cookbook recipe and the instructions appear right in front of you—hands-free, no mess, no fuss. Pretty cool, right?”

The other new features certainly don’t have as much pizzazz, but they’ll like also be appreciated.

The new lock screen will help Glass users protect the operation of their device by others. “We get a lot of questions from Explorers about ways to make Glass even more secure, so this month we’re adding the ability to lock your screen,” the post states. “Just like with your laptop or phone, no one can use your locked Glass until you enter your secret Glass handshake using taps and swipes. You can set it up in Settings.”

Google+ Hangouts fans will likely be happy about the new ability to participate in Hangouts using Glass. “You’ve told us you love video calls on Glass, but you’ve made it clear that you want Hangouts messages on Glass, too,” the post states. “Well now we’ve got it. Chatting with your best friend, messaging everyone from your ski trip at once, sending picture messages… all of it is now possible on Glass. You can enable the Hangouts Glassware and update your messaging preferences at MyGlass.”

The latest video uploading capabilities in Glass will certainly please YouTube aficionados. “Some of the videos you record through Glass are pure gold, and worthy of sharing with other people,” according to the post. “You can now upload those must-share moments by enabling the YouTube Glassware on MyGlass. Once you’re done recording, either tap on the video and swipe to the YouTube share card, or say ‘OK glass, share with YouTube.’ So go on, share that video of you at the zoo, #throughglass.”

For music lovers, the broadened Glass controls for Google Play Music All Access subscribers will be appreciated. Users can now pick between their playlists and radio, or try the “I’m feeling lucky” button to create a radio station based on previous listening history, the post states. “In addition to using voice, you can also tap on ‘OK glass’ and then ‘listen’ to choose your favorite songs.”

Lastly for now, the new iOS app for Glass is ready but Glass users need to obtain this month’s Glass software update to allow it to work, the post states. “We know we spilled the beans a bit too soon, but we’ll let you know when it’s available for download later this week.”

It’s been a busy autumn for updates for Google Glass. In November, Glass received updated software that added some helpful improvements, including the ability for users to access their personalized Google Calendar appointments and upcoming events while using Glass. Also added in the update is an easier first-time setup process and simpler commands for using Glass to go to work or to get home.