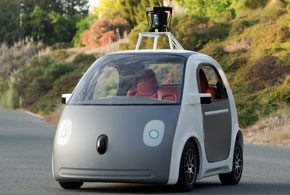 Krafcik comes to Google from car shopping and price comparison site TrueCar, where he had been president since May 2014. He will assume the new role at Google sometime in late September.

Prior to TrueCar, Krafcik was the CEO and president of Hyundai Motor America, a company he worked at for more than a decade. Krafcik, who has an undergraduate degree from Stanford University and a master’s degree from the MIT Sloan School of Management, started his career in the automobile industry as an engineer at the Ford Motor Co.

Chris Urmson, director of Google’s self-driving car project, will continue to be the technical lead for the effort and will be responsible for long technology vision and execution.

For the moment at least, the self-driving car project will continue to remain a part of Google’s semi-secret X labs operation. Contrary to some recent media reports about Google having quietly set up a new car company called Google Auto, the self-driving car project will not become an Alphabet company at this stage. “It’s certainly a good candidate to become one at some point in the future,” Google said.

Google’s move to hire Krafcik signals that the company is getting ready to move its self-driving car initiative to the next phase.

Over the past few years, the company has been testing its autonomous car technology in California and, more recently, in other states as well. The tests have involved a fleet of custom-rigged self-driving Lexus SUVs as well as several fully autonomous vehicles designed completely by Google.

The Google vehicles come without a conventional steering wheel and brake and accelerator pedal. Instead, a battery of onboard sensors, firmware and software controls all aspects of the vehicle’s operations. A set of onboard buttons allows passengers to start the vehicle and to stop it as needed. Current prototypes have a maximum speed of 25 miles per hour.

Google says its test fleet has logged more than 1.5 million miles in fully autonomous driving mode. It claims the tests have helped it teach the cars how to drive on city streets and to navigate around other vehicles, pedestrian traffic and cyclists. “We’ve even built a vehicle that we hope could someday take anyone from point A to point B at the push of a button,” Google said this week.

The tests have shown the vehicles to be very safe, according to Google. Over six years and 1.5 million miles, Google’s test fleet of autonomous vehicles has been involved in just 11 minor accidents, every one of them resulting from when a human driver was behind the wheel, the company has claimed.

Google admits that it still has a lot to learn and implement before its fully autonomous vehicles are ready for mass consumer consumption. Currently, Google plans to manufacture between 100 and 200 prototype vehicles for testing purposes over the next few years. The company has previously noted that it hopes to have fully autonomous vehicles ready for consumer use on or before 2020.