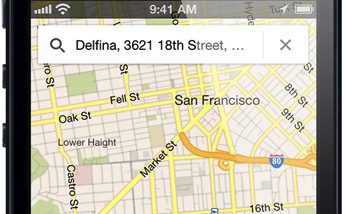 Apple fans can breathe a sigh of relief as Google announced that a version of its popular—and fully functional—mapping application will return to Apple devices running iOS 5.1 and higher, and is optimized for the iPhone 5.

“The world around us is constantly changing and, thanks to feedback from you, we make tens of thousands of daily updates to keep Google Maps accurate and comprehensive,” Google’s director of mobile maps Daniel Graf wrote in a company blog post. “Here’s a helpful hint for the new app: if you see something off, simply shake your phone to send us feedback.”

Google is riding to Apple’s rescue just as the iPhone maker’s maps app hit headlines again, when Australian police cautioned its fellow countrymen’s users not to employ the app while in certain parts of the country. Police in Mildura, a city in northwestern Victoria, were called to assist distressed motorists who became stranded within Murray-Sunset National Park after following directions provided by the application, leading the department to ask drivers to refrain from using the app.

In an interview with the BBC, Google Maps project manager Kai Hansen said its accuracy is dependent on the participation of its users to help the company keep information current, in compliment to the company’s own fleet of vehicles mapping roads and byways around the globe. Hansen noted its Maps team can make changes in minutes, rather than hours, once reported changes have been verified.

“Google Maps, as much as any other map application, lives from the data that we receive,” Hansen told the BBC. “If a road is closed for the next six months, or a road was opened two days ago – these are things that somebody who lives next to the road immediately notices, but if you’re not in the area it becomes hard to know. The more we can give you the ability to let us know about things that are changing on the map, the more other users will benefit from that corrected information.”

However, Google Maps is not the only high-profile option users have when considering an alternative to Apple’s app. Nokia recently rolled out Here Maps application on the iOS platform, which offers walking navigation guides through parks and pedestrian byways and is based on Navteq mapping data popular among in-car navigation systems.