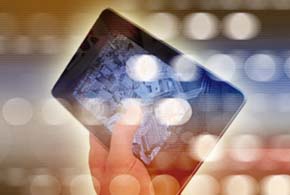 BARCELONA, Spain—For more than 50 years, Almex Group has been making and selling heavy-duty industrial equipment to assemble custom-made, specialty conveyer belts in remote locations around the world for a wide range of businesses, from minerals mining to factory use.

To do that in remote outdoor locations, users have to work with special equipment that can be used in hostile work environments, whatever the weather, while taking careful measurements using paper and pencils to figure the needed specifications for the belts that have to be created.

That seemed so old-fashioned, especially with the rise of portable tablet computers in the IT marketplace in the last few years, said Kyle Booth, the chief technology officer and global projects manager for Almex, in an interview here with eWEEK at Mobile World Congress.

A couple years ago, the idea of using a tablet instead of paper and pencils became a prime focus for Almex, and within the last year, the company began offering its own line of ruggedized, feature-filled tablets that are built to withstand harsh physical abuse when used outdoors or inside busy factories.

“Our CEO said, ‘We need a tablet that’s not going to break in the field,'” said Booth. So taking the idea of a tablet further, Almex has created two models of its AlmexPad rugged machines, featuring magnesium frames; sealed gaskets to keep out dust, water and other contaminants; and a host of other features that help make the tablets tough enough to handle nasty work by a variety of industrial, construction, first responder and other uses, according to Booth.

Almex’s first customers were mining companies that have been using them as prototypes in field tests around the world, and other companies and businesses have also been making inquiries, he said.

Both AlmexPads, the 10-inch Senior model and the 7-inch Junior model, are running the Android Ice Cream Sandwich operating system and feature large grips on each end that allow a user to hold them in both hands or in one hand like an artist would hold a palette of paints.

The Senior model retails for about $8,116, said Booth. Pricing has not yet been announced for the Junior model, which is expected to start shipping in the third quarter of 2014.

Once the machines were initially developed for the conveyor belt needs of Almex, it became apparent that a broad range of other businesses could benefit from using them, said Booth. The devices extend self-reporting of critical business information to the companies that use them through their GSM support. Using the tablets, businesses can gain safety for workers using instant job reporting, project traceability, time tracking and wide accountability, according to Almex.

“All of these needs are in the conveyor belt industry right now,” said Booth. “These would have been useful just for our company, but we are looking for new markets.”