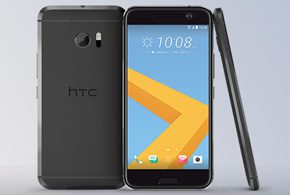 The HTC 10, which was announced by the company in an online Web debut on April 12, features a 5.2-inch, Quad HD (2,560-by-1,440-pixel) touch-screen display that is covered with Corning Gorilla Glass, a Qualcomm Snapdragon 820 quad-core 64-bit processor, 4GB of memory, 32GB or 64GB of built-in storage, a microSD slot that accepts storage cards up to 2TB, a USB-C port and a fast-acting biometric fingerprint scanner for security.

The new phone, which has a metal unibody design and runs on the Android 6.0 Marshmallow operating system, will be available in the United States from mobile carriers including Sprint, T-Mobile and Verizon Wireless, which will announce colors, availability and pricing in the near future.

An unlocked version of the HTC 10 is being offered for preorders immediately through HTC.com, for shipment in early May, according to the company. The unlocked phone, which will come in Glacier Silver and Carbon Gray colors and cost $699, will work on the AT&T and T–Mobile networks. The phone also comes with a damage and accident protection plan that includes one replacement at no charge within the first 12 months of ownership for a cracked screen or water damage.

The HTC 10’s front-facing camera is a 5-megapixel device with auto-focus, OIS, an F/1.8 lens aperture, a 23mm focal length, auto selfie and voice selfie features, and Full HD 1080p video recording. Both of the handset’s cameras are designed to provide improved low-light, high-resolution photos for users in a wide variety of conditions.

Also included are re-engineered HTC BoomSound Hi–Fi edition speakers with separated tweeters and woofers and a dedicated amplifier on each speaker, high-quality 24–bit, hi–res audio recording capabilities and an all–new Personal Audio Profile system that creates a unique profile that is tuned to a user’s individual hearing needs.

Powering the new handset is a 3,000mAh battery that comes with a new Quick Charge 3.0 feature that can provide a 50 percent charge in just 30 minutes. Also included is Boost+, which makes the phone faster while consuming less power, according to HTC. Boost+ optimizes the phone’s memory, provides a game battery booster for game play, and automatically detects and shuts down apps that use excessive power to improve battery life by up to 30 percent.

An App Lock feature adds a layer of security by enabling users to lock any app as desired, while a new App Manager can give instant fixes for misbehaving apps.

The HTC 10 is HTC’s flagship device, built to take on premium smartphones such as Apple’s iPhones, Samsung’s Galaxy S7 handsets, LG’s G5 smartphone and others.

The new HTC phone is built to succeed the HTC One M9 phone, which went on sale in the United States in April 2015 for about $650. The HTC One M9 was packed with improvements over its predecessor that included a 5-inch, full HD 1080p display; an eight-core Qualcomm Snapdragon 810 processor with four cores running at 2GHz and four cores running at 1.5GHz; 3GB of RAM; 32GB of built-in storage that can be expanded up to 128GB with a microSD card; and a 2,840mAh battery. The M9 runs on the Android 5.0 Lollipop operating system and HTC’s Sense 7 software.