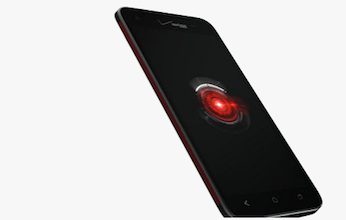 HTC and Verizon Wireless introduced the Droid DNA Nov. 13 and with it a boost to the fading Droid brand.

“This is Droid like only HTC can do. It’s about bringing Droid back to its original roots,” Jason Mackenzie, president of HTC, said at a New York City event where, with executives from Verizon, the smartphone was unveiled.

The Droid DNA’s display is 5 inches and it’s the first on the market with a 1080p HD super LCD 3 and Corning Gorilla Glass 2. It’s also the first Android phone with wireless charging and, like Nokia’s newest Lumia phones, will arrive with a number of accessories that take advantage of this capability, as well as audio accessories to show off the sound perks from HTC’s relationship with Beats Audio.

The DNA has a 2.55-volt built-in headset amplifier, as well as a second amp for the external speaker on the back.

A black device with a soft-touch finish on the back and accents in red, the DNA takes styling cues from HTC’s Evo devices. Discussing the smartphone, Jonah Becker, HTC’s design director, made repeated references to the car world, calling the DNA a “true performance beast” and saying his team went about the styling like the designers of top supercars do, working to “transform [something standard] into an object of desire unlike anything else on the road.”

Becker also insisted that, despite the 5-inch display, the DNA is a smartphone and not a phablet—the term loosely applied to devices that straddle the divide between smartphone and tablet. The rest of the phone, he said, was so cleverly minimized that it users will still be able to “hold it in one hand or slip it into your pocket.”

As with the Windows Phone 8X, HTC’s newest effort with Microsoft, HTC paid attention to the often-overlooked front-facing camera. It’s a 2.1-megapixel with an 88-degree ultra-wide-angle lens, which means that in self-portrait mode, triple the viewing area can be captured, compared to the front cameras of most other phones. While not so necessary when actually taking a self-portrait, when snapping a photo with friends, it means more friends will fit in the frame.

The rear camera was also given considerable attention. It’s an 8-megapixel with an f/2.0 28mm wide-angle lens, five-level automatic flash, a backside illuminated (BSI) sensor and what HTC calls “superfast autofocus.” A Continuous Shooting feature takes multiple photos at up to four frames per second and VideoPic enables users to shoot video and take a photo at the same time. And as on the front, the video camera can capture video in 1080p HD.

HTC also improved on its photo gallery, which now offers easier, better ways to organize the photos on the phone.

“The DNA is truly the pinnacle of the Droid brand,” said HTC’s Mackenzie. “It’s not only the sleekest Droid ever, it’s the most advanced phone on the market.”

Verizon is now accepting pre-orders for the DNA, which will go on sale Nov. 21 for $199 with a two-year contract.