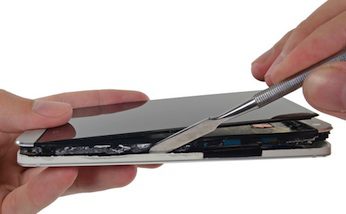 The HTC One and the BlackBerry Z10 offer a study in contrasts. Just ask repair site iFixit, which recently disassembled the two smartphones, both key devices in the portfolios of vendors struggling for a win.

iFixit is a strong believer in the importance of being able to repair—and so continue to use—all the things users spend their hard-earned money on. So the iFixit technicians were delighted to report earlier this week that, following a teardown, the Z10 had earned a repairability score of 8, on a 1-to-10 scale in which 10 tops the charts.

A few days later, the HTC One instead scored a 1, “a first-ever for a cell phone,” iFixit Chief Information Architect Miro Djuric wrote in March 28 blog post. “It turns out the HTC One’s guts are glued into the machined aluminum casing.”

He went on to explain:

It took us over half an hour to separate the rear aluminum case from the functional components of the phone. Worse yet, our diligent spudgering appears to have permanently mangled the plastic bezel surrounding the aluminum case. It’s possible that prying at a snail’s pace while applying heat could minimize this damage, but we’re not too hopeful. This phone was not made with openability in mind.

Presenting a photograph of the One’s innards on the iFixit site, the team called the amount of work required to get that relative beauty shot “immense.”

Eleven steps in, and after some “prying and peeling,” the team got to the battery.

In total, the team liked the One’s “solid external construction” but frowned at the copper shielding covering many internal components; the display assembly that can’t be replaced without removing the rear case; the battery buried deep beneath the motherboard; and the fact that it was “very, very difficult (possibly impossible?) to open the device without damaging the rear case.”

That makes any component “extremely difficult” to replace.

With the Z10, BlackBerry made lots of different choices.

Battery support is a big deal with BlackBerry. The company will sell users extra batteries and a charger so that the battery can be quickly swapped-out as needed for all-day support.

“It’s a relief to see a smartphone in this day and age with a removable battery,” Djuric wrote. “With the right accessory, you even have the option of charging your phone as well as a spare battery at the same time—perfect for the 15-hour flight to Taipei.”

BlackBerry lost points, however, with its decision to fuse the LCD to the glass, which would make a repair more expensive, and for the “somewhat strong” adhesive holding some small components, like the camera, in place.

That BlackBerry can translate reparability into device sales is doubtful, but this week it increased its chances of doing so. T-Mobile began selling the Z10 March 26, and Verizon Wireless added it to its roster two days later.