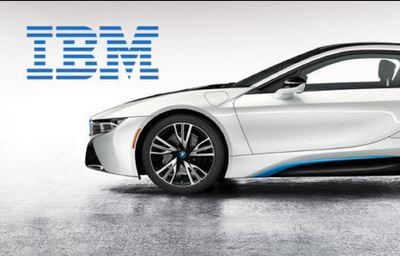 IBM is continuing its efforts to expand the reach of its Watson cognitive computing technology in the fast-growing connected car market by partnering with high-end automaker BMW for its new CarData platform.

IBM will connect its Bluemix cloud platform with CarData, where data from the vehicles will be hosted and analyzed by Watson IoT and then sent to third parties—such as insurance companies and auto shops—of the owner’s choosing.

The idea is that drivers will be able to use the telematics data generated by their cars to take advantage of new services that third parties will be able to create for improved customer experiences. For example, the data may be used to let auto shops know when parts are about to fail and when repairs need to be done.

This is the latest move in the connected car market by IBM officials, who are hoping that the company’s Bluemix and Watson IoT platforms will be recognized in the connected vehicles market as open, neutral resources that can securely manage and analyze their data.

IBM in October 2016 announced a similar deal with GM, which is developing what officials there say is a “cognitive mobility platform” called OnStar Go. BMW’s CarData, OnStar Go will use the Watson technology to analyze data collected by the car and deliver interactions between the car’s driver and surrounding businesses.

IBM, which is a pilot partner of BMW’s CarData initiative, expects the first use cases and client services from the partnership to launch in the fall.

The connected car market is expected to grow rapidly over the next five years. Analysts with Technavio are predicting that revenue will increase almost 11 percent a year, hitting $8.47 billion by 2021. It will grow about 10 times faster per year than the overall passenger car market, Technavio stated in a report this week. Top tech players like Microsoft, Cisco Systems, Google and AT&T are aggressively pushing into the market.

The alliance with BMW wasn’t the only announcement IBM made this week about its ongoing push to leverage Watson and BlueMix to extend their reach in fast-growing markets. Officials also said the company is rolling out a suite of cognitive offerings powered by Watson designed to help financial institutions manage their financial responsibilities. The software can be deployed on the IBM Cloud.

The three offerings are Watson Regulatory Compliance to provide information on regulatory requirements, Financial Crimes Insight with Watson that provides insights into such areas as money laundering, and Algo One Big Data Foundation for improving risk management.

They’re part of a larger effort by IBM to train Watson for specific industries, which has included health care and cyber-security. For financial services, IBM’s Promontory Financial Group subsidiary trained Watson on 60,000 regulatory citations. In addition, the artificial intelligence platform also has begun reviewing transactions and cases to learn about financial crimes.

“Essentially, we’re embedding our deep regulatory experience into Watson so that a broader group of professionals can benefit from this knowledge and help their organizations operate more effectively and efficiently,” Gene Ludwig, founder and CEO of Promontory Financial Group, said in a statement.

According to a report in Barron’s, IBM officials said the company has invested $3 billion in Watson and its cognitive analytics capabilities.