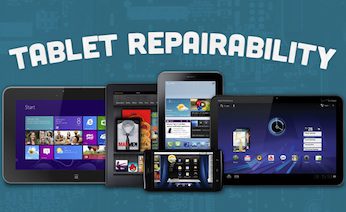 The Apple iPad may be the world’s best-selling tablet, but if you value the ability to open and fix and ideally prolong the life of your pricey device, the best-in-class tablet is the Dell XPS 10, according to iFixit.com.

The screwdriver-wielding tech site dedicated to empowering people to fix and continue using their otherwise landfill-destined hardware opened up and tore down 18 popular tablets and gave each one a “repairability” score between 1 and 10—10 being the most repairable and 1 being closest to don’t bother. While iFixit has been tearing down for some time, its comprehensive, at-a-glance Tablet Repairability List is something new.

“Every time you walk into an electronics store, you’re making a choice,” iFixit founder Kyle Wiens wrote in a Feb. 28 blog post. “Every gadget you buy is a vote cast. We want people to make informed decisions, as their vote influences how hardware manufacturers choose to design in the future.”

The Dell XPS 10 scored a 9, with iFixit celebrating that it was easy to open, the battery was easy to remove and inside its screws and cables were color-coded and labeled.

Falling in behind the XPS 10, with a very commendable score of 8, were the Dell Streak, the Amazon Kindle Fire, the Motorola Xoom and the Samsung Galaxy Tab 2 7.0. These shared features such as not including proprietary fasteners and having front glass that isn’t fused to the LCD.

The absolutely least repairable tablet, per iFixit, is the Microsoft Surface Pro, which scored a 1. (The Surface RT, notably scored a 4.)

Tearing down the Surface Pro in February, iFixit Chief Information Architect Miro Djuric blogged that while the Pro has “some nifty features,” its internals are inaccessible. “Adding salt to the wounds,” Djuric continued, “the battery is buried behind the motherboard and glued down to the case.”

Microsoft in this way managed to beat out the Apple tablets, which over the years have been a source of frustration to the iFixit team, moving them to even fabricate special screwdrivers to use with the proprietary screws Apple designed to keep users out of their devices. (iFixit sells the special screwdrivers, along with complete repair kits.)

The Apple iPad Mini, iPad 4, iPad 3 and iPad 2 each received a repairability score of 2. The original iPad, however—which featured a design that made it less likely that its glass might crack during disassembly—had received a score of 6.

Along with the iPad 1, iFixit gave a 6 to both the Barnes & Noble Nook and the Google Nexus 10. The Amazon Kindle Fire HD 8.9-incher received a score of 5.

iFixit’s Wiens pointed out in his post that not everyone cares whether their devices are easy to repair. Should more people begin to care, it’ll be happy news for Dell, which wasn’t among the top-five tablet-shipping vendors during the fourth quarter of 2012.

Wiens added, “Our hope is that through customers’ votes, manufacturers will create long-lasting, easy-to-repair hardware that we can all love.”