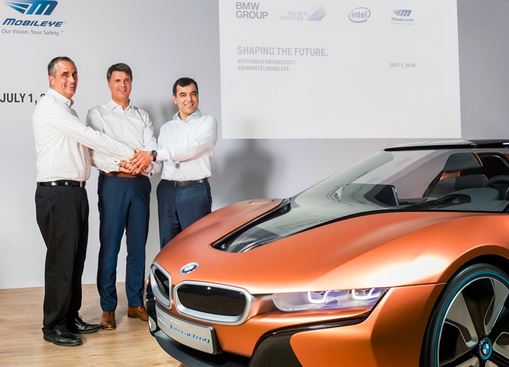 Intel revealed March 13 that it figuratively will write a check with a lot of zeroes, $15,300,000,000 ($15.3 billion, for short), to acquire autonomous vehicle-software maker Mobileye. That’s putting a company’s money where its risks are.

The transaction immediately gives Intel a strong new position in the market for autonomous vehicle IT while at the same time connecting it in a new way with more than a dozen of the most prominent automakers in the world.

The acquisition will result in an autonomous-driving Intel division that combines Mobileye with Intel’s Automated Driving Group. The team will be based in Jerusalem, Israel; it will be led by Amnon Shashua, who currently serves as Mobileye CTO and board chairman.

According to software industry analyst IHS, Mobileye currently owns about 70 percent of the world market for driver-assistance systems, including automatic braking, lane centering and pedestrian detection. The analyst firm said it expects to see as many as 21 million autonomous vehicles on the nation’s roads by 2035.

That’s the market in which Intel is on the road to become a vital supplier.

Intel, Mobileye and BMW partnered last year with the five-year goal of developing fully autonomous driving as a platform for other automakers to license and use by 2021. Automotive industry analysts have projected automated vehicles to begin carrying passengers as a commonplace occurance within the next three to five years.

Google, which now calls its program Waymo, has been testing its own driverless autos for nearly eight years, and Uber has been doing the same for about three years.

Mobileye Entrenched as a Key Auto Industry Supplier
Intel is buying a well-established company. Mobileye’s intellectual property, which includes vision chips and software that interprets data from a camera to anticipate possible collisions with cars, people, animals, and other objects, is already used by 27 automakers, including Audi, BMW, General Motors and Ford.

Mobileye specializes in software that processes information detected from cameras and other sensors in order to decide where a car should steer or to use emergency braking. The combination of its IP with Intel’s adds hardware, software expertise and several data centers to the companies’ goal of making driverless car transportation a normal experience.

“Intel’s acquisition of Mobileye underscores the potential for autonomous driving and magnitude of investment required to realize it,” Paul Asel of Nokia Growth Partners told eWEEK in a media advisory.

“The acquisition furthers two trends:  semiconductor industry consolidation and the entry of tech majors into the auto sector through acquisition (Samsung/Harmon). The acquisition bolsters Intel’s effort to enter the automotive sector and broadens its automotive offering. Highlighting that the acquisition is immediately accretive, Intel is signaling its view that pricing is reasonable, which is reinforced by recent comparable acquisitions.

“From Mobile Eye’s perspective, the sale may be timely, as there are numerous new entrants in the space that will put pricing pressure on its products,” Asel said.

Intel and Mobileye want to co-develop a set of sensors and camera systems that are expected to bring in annual revenue in the $10 billion range by 2022, according to IHS.

“Mobileye brings the industry’s best automotive-grade computer vision and strong momentum with automakers and suppliers,” Intel CEO Brian Krzanich said. “Together, we can accelerate the future of autonomous driving with improved performance in a cloud-to-car solution at a lower cost for automakers.”