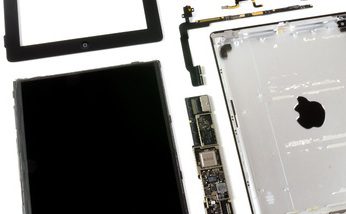 The teardown analysts over at iFixit have been extremely busy the past two weeks, dutifully taking apart Apple’s latest gadgets, the 13-inch MacBook Pro with Retina display and the iPad Mini tablet. Now the teardown team has put the screws to the fourth-generation, full-size iPad, which was unveiled last month alongside the iPad Mini and MacBook Pro. The latest edition of Apple’s popular tablet, launched just seven months after the debut of the iPad 3, sports an A6X processor, seen as central to the iPad’s consumer and enterprise appeal.

In their effort to dismantle the device, iFixit also discussed early on one of the major differences between the newest iPad and the iPad 3 in the Lightning connector, which replaces the 30-pin dock connector found on all older Apple devices. To remove the screen from the casing, the team used a tool to soften the adhesive binding, discovering a liquid crystal display (LCD) panel manufactured by LG. The teardown team had previously found Samsung-manufactured displays in the iPad 3 and iPad Mini, but Apple often relies on multiple suppliers for the same components, so it is possible some iPad 4 tablets sport Samsung screens.

The report noted Apple passed up the chance to use the space created by the smaller Lightning connector to install bigger speakers—instead letting the new cable sit in a frame the same size as the old connector. The team also lamented Apple’s habit of very securely adhering the batteries found in its products, in this instance to the rear case of the tablet. “Since batteries are consumables that wear out, the trend of glued-in, hard-to-access batteries in iPads and other Apple devices is unfortunate,” the report noted.

The front-facing camera on the iPad 4 was also deemed an improvement over the camera on the last iPad, offering a 1.2-megapixel (MP) FaceTime HD camera, with the ability to shoot 720p HD video instead of the 0.3MP FaceTime camera in the iPad 3. While the improved camera is slightly thicker, Apple was able to fit it into the same space. Overall, the iPad 4 received low marks on the reparability scale, scoring a 2 out of 10 (a 10 being the easiest to repair). However, the report noted the LCD was easy to remove once the front panel is gone, and the battery, which is not soldered to the logic board, makes the replacement process “a tad less difficult.”

“Just like in the iPad 2 and 3, the front panel is glued to the rest of the device, greatly increasing the chances of cracking the glass when trying to remove it. Gobs, gobs, and gobs of adhesive hold everything in place, including the prone-to-start-a-fire-if-punctured battery,” the report concluded. “The LCD has foam sticky tape adhering it to the front panel, increasing chances of it being shattered during disassembly. You can’t access the front panel’s connector until you remove the LCD.”