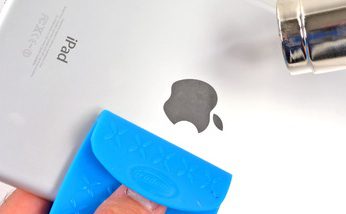 The early reviews of Apple’s iPad Mini tablet are in, and between the critical reception and the robustness of preorder sales (both white and black editions of the tablet are currently sold out), Apple looks like it has another hit gadget on its hands. Now the guts of Apple’s latest device have been exposed, thanks to the technicians over at iFixit with their teardown analysis, revealing two speaker grills—the first mobile device from Apple to house stereo speakers.

The teardown team opened the tablet by using a tool that, when placed in a microwave with the tablet, softens the adhesive affixing the glass display to the body. Once inside, the display requires two hidden screws and two exposed screws to remove, while a large metal plate is held in place by 16 screws—a design feature found on the fifth-generation iPod Touch and the iPhone 5. The team also discovered that the LCD and front glass are two separate components, but noted that due to the display assembly, one would need to remove the LCD prior to removing the digitizer.

Despite its very public spats with competitor (and component supplier) Samsung, Apple has used the company for the LCD component of the tablet, although iFixit noted Apple often relies on multiple suppliers for the same components, so it is very possible other LCD manufacturers are powering iPad Mini screens. Above each speaker are two antennas, which were presumed to be for WiFi and Bluetooth capability.

The ever-humorous iFixit reports summed up the design of the tablet: “Apple wasn’t joking about ‘mini’; these are some of the smallest screws we have ever seen!”

The teardown also examined the dual cameras—a front-facing FaceTime HD camera that delivers 1.2-megapixel (MP) photos and a rear-facing iSight camera that offers 5-MP resolution and high-definition video in the tablet. So far, the most revealing discovery is the existence of two speakers in the midst of an Amazon ad campaign claiming the iPad Mini, which is in direct competition with the Kindle Fire HD, had only mono sound.

The 7-inch tablet market is already a highly competitive space, with low-cost entries from Amazon and Google stealing market share from the full-size iPad, which costs substantially more and sports a 9.7-inch screen. A report from IHS predicts the arrival of the smaller iPad will “turbocharge” the 7-inch tablet market, helping it to approximately double in 2012 and 2013. The 7-inch size range will account for 28 percent of all tablets in 2012, up from 24 percent in 2011. Sales are expected to rise about 100 percent this year to 34 million units, up from 17 million in 2011.

A higher-than-average price point for the iPad Mini ($329) could prevent Apple from reaching the widest audience possible. However, with its foot now firmly planted in the 7-inch tablet space, and the full-size iPad still commanding nearly 70 percent of the worldwide tablet market, Apple is strongly positioned to capture a big percentage of the lucrative holiday-shopping season. A recent investor note from Canaccord Genuity analyst Michael Walkley estimated that in 2013, Apple would sell 101.6 million tablets, compared with Samsung, which is expected to sell 8.4 million tablets, and Amazon, which is forecast to sell 10.7 million tablets.