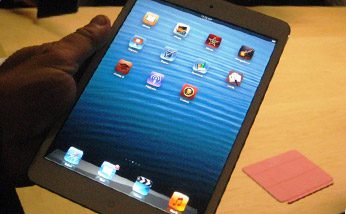 Early promotions helped drive a rush in online shopping sales over the weekend, while the biggest surge came from mobile consumers led by Apple’s iPad tablet, according to IBM’s Digital Analytics Benchmark released on Nov. 24.

The iPad generated more traffic than any other tablet or smartphone, reaching nearly 10 percent of online shopping. The iPad was followed by another popular Apple device, the iPhone, with 8.7 percent, and Google Android-based devices with 5.5 percent. The iPad dominated tablet traffic at 88.3 percent followed by Barnes & Noble’s Nook wuith 3.1 percent, the Amazon Kindle with 2.4 percent and the Samsung Galaxy Tab with 1.8 percent.

Overall online sales on Thanksgiving grew by 17.4 percent followed by Black Friday where sales increased 20.7 percent over last year, while mobile purchases exploded with 24 percent of consumers using a mobile device to visit a retailer’s site, up from 14.3 percent in 2011. Mobile sales exceeded 16 percent, up from 9.8 percent in 2011.

“This year’s holiday shopper was hungry for great deals and retailers didn’t disappoint, rolling out compelling offers which consumers gobbled up on Thanksgiving straight through Black Friday,” IBM Smarter Commerce’s strategy director Jay Henderson. “The big winners were chief marketing officers who used technology to deliver customer experiences that not only connected shoppers with personalized deals but did so at the right touchpoint and at precisely the right time and place, whether on their couch or the store floor.”

Shoppers referred from social networks such as Facebook, Twitter, LinkedIn and YouTube generated .34 percent of all online sales on Black Friday, a decrease of more than 35 percent from 2011. Analysis of public social media content came from IBM’s Social Sentiment Index, an analytics and natural language processing tool that analyzes large volumes of social media data to assess public opinions.

“To remain relevant, retailers must find opportunities to participate in holiday rituals in ways that aid consumers’ attainment of the holidays they imagine — enjoying time with family and shopping when convenient,” University of Notre Dame Mendoza School of Business assistant professor Tonya Bradford said. “Technology provides more opportunities for retailers to create these experiences for consumers through their mobile computing devices.”

Consumer electronics (CE) once again was second only to clothes as the most popular items purchased this weekend, according to interim results from the Consumer Electronics Association’s (CEA) annual Black Friday Survey, which examines shopping habits, intentions and expectations Thanksgiving Day through Monday, Nov. 26.

Mobile connected devices were the most popular electronics purchased through Friday, according to the report Among those buying CE, more than a quarter (26 percent) bought a smartphone and 22 percent bought a tablet Thursday or Friday. Headphones (25 percent), portable media players (22 percent) and video game consoles (20 percent) were the next most commonly purchased CE products during the first two days of the long weekend.