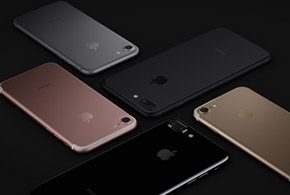 As Apple’s latest iPhone 7 and iPhone 7 Plus smartphones went on sale Sept. 16, most online shoppers were choosing to buy the larger iPhone 7 Plus model over its smaller iPhone 7 model, according to online preorder sales data collected and analyzed by digital commerce research firm Slice Intelligence.

Interestingly, that trend contrasts with iPhone purchases in the past when sales of the smaller iPhone 6 and iPhone 6s phones beat out initial sales figures for the iPhone 6 Plus and iPhone 6s Plus when they debuted in the last two years, according to Slice. It’s the first time such a purchasing switch has happened, the company said.

“What we thought was surprising was that when we looked at the mix, the iPhone 7 Plus is outselling the iPhone 7” right now, Jaimee Minney, a spokeswoman for Slice, told eWEEK. “With the popularity of the [smaller] iPhone 5, people seemed to like that smaller form factor.”

One feature that likely led to the better sales for the iPhone 7 Plus is that it is equipped with a dual lens camera for improved photos, she said.

The Slice data looks at online sales based on electronic receipts to consumers and doesn’t track or project how many phones are actually sold through all sources, said Minney. Slice has a panel of 4.2 million shoppers and collects purchasing data from them each day to map out trends.

The data also shows that 69 percent of buyers selected the black or jet black colors of the new iPhone 7 models. Space gray was previously popular with the iPhone 6 and iPhone 6s models, but the color is no longer offered.

For on-board device storage, 67 percent of iPhone 7 buyers are choosing the 128GB middle option over the smaller 32GB and larger 256GB options, according to Slice. Nineteen percent of buyers chose the 256GB model, while 14 percent selected the 32GB version.

Apple’s new iPhone 7 models have been in such demand during preorders that the company quickly sold out of its initial opening-day supplies of the jet black iPhone 7 and all colors of its larger iPhone 7 Plus handsets as today’s launch date loomed.

Apple is still taking orders for the new phones in all colors, but not all models and colors will be immediately available in stores.

Preorder sales of the new handsets, which were publicly announced Sept. 7, had been steady and hot for mobile carriers, including T-Mobile and Sprint, according to a recent eWEEK report. The handset preorders outranked previous iPhone preorder numbers at T-Mobile and set a single-day preorder sales record for any smartphone ever offered by T-Mobile.

T-Mobile’s preorders from Sept. 9 through Sept. 12 were nearly four times the level of the next most popular iPhone and are continuing to be strong, according to the carrier. T-Mobile said the iPhone preorder figures are the highest preorder numbers in its history, and its preregistrations for the iPhone 7 before preorders even opened also broke records for T-Mobile, exceeding preregistrations for the iPhone 6 and iPhone 6s handsets.

Sprint said it saw soaring preorder rates for the iPhone 7 and iPhone 7 Plus, which were up more than 375 percent in the first three days over last year’s release of the iPhone 6s models.

The latest iPhone 7 models, which start at $649, are splash-, water- and dust-resistant and include new 12-megapixel cameras (dual lens cameras in the iPhone 7 Plus model) and the new A10 Fusion processor. The handsets come in 32GB, 128GB or 256GB versions.

The new iPhones no longer include a headphone jack, however, and come with a set of ear buds that connect to the phones using the existing Lightning port. Apple’s new optional wireless AirPods sell for an additional $159 to allow users to go wireless, though other options also exist.