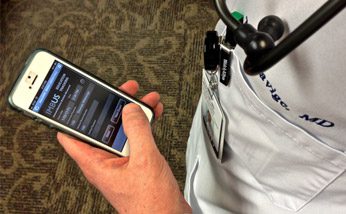 Apple’s iPhone has become a tool for tracking doctor training at Abbott Northwestern Hospital in Minneapolis. The hospital has designed a custom app in FileMaker to record how well residents conduct bedside ultrasound exams.

Called Internal Medicine Bedside Ultrasound (IMBUS), the tracking app is part of a training program on how to use the latest ultrasound technology.

Training is “centered around point-of-care small ultrasound machines we can carry on our shoulders to the bedside,” Dr. David Tierney, director of the IMBUS program at Abbott, told eWEEK.

Bedside ultrasound training will become standard for medical students, residents, fellows and faculty training programs over the next decade, according to Abbott, which is part of Allina Health, a nonprofit that serves patients in Minnesota and Wisconsin.

Apple’s FileMaker is a platform that allows developers to design, build, integrate, deploy and manage custom applications for iOS, Windows or the Mac.

The IMBUS training app tracks credentialing numbers, which doctors enter into the iPhone from a patient’s bedside, Tierney said.

“It takes out all the manual recording and entry,” Tierney said.

Abbott is using a custom FileMaker application as well as FileMaker Go for iPhone.

FileMaker offered a more scalable option to create a physical exam database than Microsoft Access or Excel, and provided simple integration with the iPhone, according to Tierney.

The iPhone has become a key tool for doctors at Abbott as an alternative for pagers as well as to track resident training on bedside ultrasound technology. Although 95 percent of the devices running FileMaker Go are iPhones, a handful are iPads, Tierney said.

Bedside ultrasound provides a handy supplement to traditional items such as a stethoscope during physical exams, according to FileMaker.

Portable ultrasound machines allow doctors to visualize conditions they could only feel before with their hands or listen to with their stethoscopes, Tierney said.

Doctors carry the portable ultrasound machines over their shoulders or in their shirt pockets. Doctors can view and store ultrasound images in the IMBUS database in FileMaker Go on the Apple smartphone. The iPhone allows doctors to enter ultrasounds in the database as a patient’s exam takes place.

“It’s critical to ensuring that studies are entered reliably and immediately,” Tierney said in a statement.

IMBUS lets doctors track the number of ultrasound tests performed and the accuracy of the studies. This information affects whether a doctor receives certification to perform ultrasound exams. Within FileMaker Go, IMBUS on the iPhone stores ultrasound types such as abdominal, cardiac, soft tissue, pulmonary and vascular.

Trainers evaluate whether bedside ultrasound results match independent imaging studies, according to FileMaker. Doctors can also track their progress in the training program in FileMaker Go on the iPhone.

Before FileMaker Go, doctors in the IMBUS program at Abbott would use an index-card system to keep track of ultrasounds.