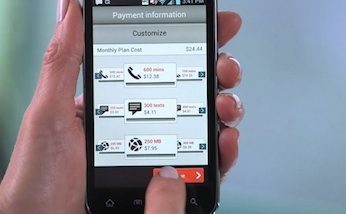 ItsOn is both a taunt to the wireless industry and a new brand to take note of.

The company has created cloud-based software that enables mobile service providers to extend some fascinating new features to subscribers. But while it’s working to strike deals with major carriers in the United States and abroad, it’s gone ahead and launched its own mobile service, Zact, which runs on the Sprint network.

The premise of Zact is that its plans are completely customizable and at any time. With a Zact app, a user can go in and dial up how many minutes she’d like—if she sees she’s nearing her limit—or dial back the amount of data she originally said she wanted, if she sees she’s not going to use most of it.

The dialing back doesn’t matter too much, though—if at the end of the month Zact sees you signed up for a bigger plan than you needed, it automatically adjusts it for you and the dollar difference is credited to your account. These aren’t rollover minutes; these are dollars—if you say you want $10 worth of minutes but wind up using $5 worth, you have a $5 credit going into the next month.

The Zact app also has a dashboard that’s key to the service’s other benefits.

First, though, it’s important to note that to use Zact you have to buy a phone with Zact software already installed on it (more on that later), but you don’t need your own plan. A family of four could buy four phones but all share from one plan. Or a small business owner could buy 50 phones, one for each of his drivers, say, and control everything about those phones’ service options from his own Zact phone.

For example, the business owner could choose a plan with 600 texts and allow each of his drivers a limit of 100 texts a months, as well as X number of minutes and maybe 2 or 10 or zero gigs of data.

The mom in the example family can likewise portion out minutes and text and data, as well remotely control the other devices, dictating, for instance, the hours when calls can be sent from her teenager’s phone—maybe not between 9 a.m. and 3 p.m. on weekdays, say, though her phone and her husband’s phone, as well as 911, would be exceptions to that rule. She can also choose which apps her kids’ devices can access, and when.

Only the “administrator,” the mom, in this case, has the ability to set controls and to decide who else can be an administrator.

Greg Raleigh, founder and CEO of ItsOn, said the company went through four beta trials, collecting user feedback, incorporating it into the product and then trialing it all over again over the course of two years.

“We think that what we have now is exactly what people really want,” Raleigh told eWEEK during a briefing last week.

“You can buy apps, or voice or email apps—and whichever email app you want to use. On Zact it costs $2.49 a month for all-you-can-eat mobile email. You create the plan that’s perfect for you,” said Raleigh.

Raleigh is no stranger to the industry. In fact, much of it seems built on his back. He said that Long Term Evolution (LTE) is a direct result of some of the academic papers he wrote at Stanford University in the 1990s. Additionally, some of his early startup companies created the core technologies in WiFi and 4G, he said, and while at Qualcomm he created the Gobi modem, which enables connections between devices on 3G, 4G and LTE networks.

“It should be simple to add a device to the network. You should be able to share a service plan amongst phones. It should be intuitive to add services [such as international roaming] right on the phone,” said Raleigh. “We believe the world needs this.”

As of May 13, consumers can preorder Zact phones, which will begin shipping in June. For now, Zact is offering only two options—the Android-running LG Viper 4G LTE for $399 and the LG Optimus Elite for $199.

According to Nielsen Research, the average person in the United States spends $93 a month on wireless services and each month uses 644 voice minutes, sends 764 texts and uses 568MB of data. Were a Zact user to sign up for those amounts, said the company, the monthly bill would be approximately $37.

The minimum monthly ZACT bill is $4.99 per line, which a spokesperson said is what it costs ZACT to support the line.

Raleigh said he used to be a Verizon Wireless subscriber, but the phone was a business expense and he never looked at the bill. When he finally did, he saw that, given the features he’d added over time, it was $210 a month.