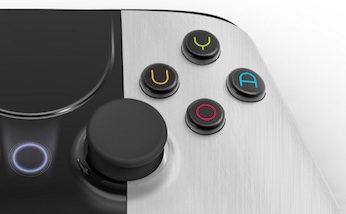 Microsoft may be flailing when it comes to operating systems, but it dominates the game console market. An Android-running, Kickstarter-backed upstart, however, is looking to change that.

Ouya announced Dec. 28 that it had “licked the stamps” on 1,200 Ouya Developer Console packages, which are now “on their way to developers around the globe—by land, air and sea. OK, only by air—we want you to get them quick,” the company wrote in a blog post on the Kickstarter site.

The packages include a Dev Console with a micro-USB port and two “frosted translucent Ouya Dev Controllers” described as “sleek, solid and … see-through! (We’re, ahem, open).”

Open, as in running on the open-source Android platform. Openness is a meaningful aspect of Ouya, according to Ouya founder Julie Uhrman, who even encourages hackers to break into the physical console. (Rooting doesn’t void the warranty.)

“Ouya is an inexpensive game console for gamers. All the games are free to try. Anybody that wants to develop a game for television—we allow them the ability to do this,” Uhrman said in the Kickstarter video in which she made her case to prospective investors. Which, in the Kickstarter world, is anyone willing to part with a few or many dollars.

The video noted that there are “a lot of hurdles” for developers designing for consoles, including that the business is expensive and “closed to independent developers.”

Uhrman’s goal was to raise $950,000. Less than nine hours after launching, funding pledges passed the $1 million mark, setting a new Kickstarter record. By the time the funding period had closed, more than 63,000 people had signed on to back Ouya, collectively pledging nearly $8.6 million.

“When we raise this money,” said Uhrman in the video, “it means that we have arrived and there is a need for an open game console and that there is support from gamers and developers alike—[they] are the signal that this is wanted.”

In November 2012, Microsoft celebrated its 22nd consecutive month as the top-selling game console. In October 2012 alone, it sold 270,000 Xbox 360 consoles and held a 56 percent share of current-generation console sales.

Relative to its other offerings, Xbox 360 is a small part of Microsoft. But it would still be bad news for the company to take a hit in the one area where it is arguably the most sure-footed.

Microsoft ended 2012 with the releases of two long-awaited operating systems, Windows 8 and Windows Phone 8, but neither has been as well received as the company hoped.

Research firm NPD Group reported Nov. 29 that since the Oct. 26 launch of Windows 8, sales of Windows devices had fallen 21 percent, compared to the same period a year earlier, and two days before Christmas, The New York Times reported that Windows 8 “failed to pack shoppers into a Microsoft store in a mall” in Microsoft’s hometown of Bellevue, Wash.

Writer and filmmaker Brian Boyko, in a YouTube clip finding a following around the Web, describes Windows 8 in stronger terms, calling it “unusable” and downright “user hostile.”

Nokia smartphones running the new Windows Phone 8 are already being discounted, Roger Kay, principal analyst with Endpoint Technologies, pointed out in a Jan. 2 blog post on Forbes in which he calls for the resignation of Microsoft CEO Steve Ballmer.

“Over the years, Ballmer has made a buffoon of himself while turning out wrong call after wrong call on products, markets, and people,” wrote Kay. He added that the latter has included the company’s policies toward developers, which have devolved to “start with ‘What can you do for us?’ and end with licensing policies designed to absorb any possible profit that developers might make.”

Mobile device platforms live and die by their ability to attract developers (perhaps tellingly, ahead of the Windows Phone 8 launch, Microsoft had to pay developers of very popular apps to build versions for its app store). Will the same soon be true in the world of gaming consoles?

“Certainly, gaming for less is appealing to the narrow but dedicated segment represented by console gamers. Of course, many already have their platform,” Kay told eWEEK. “So, Ouya has to woo them away.”