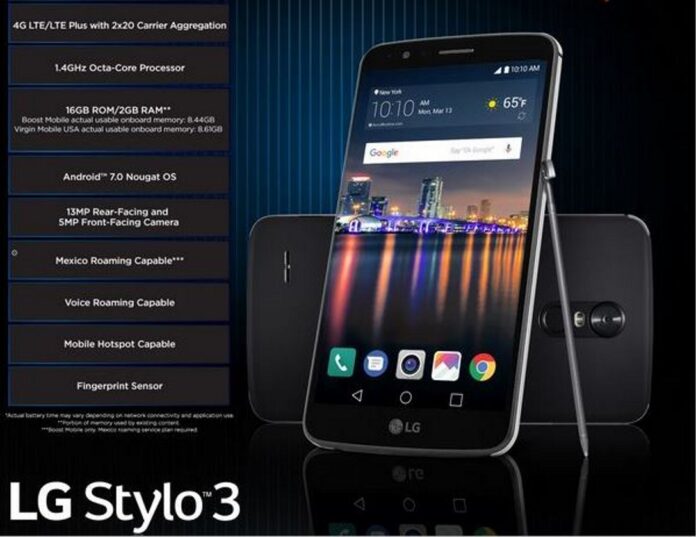 The LG Stylo 3 also includes 16GB of onboard storage, 2GB of memory, a 13-megapixel rear-facing camera, a 5-megapixel front-facing camera that captures photos automatically when the subjects look into the lens, a 3,200mAh battery for up to 25 hours of talk time, and a built-in fingerprint sensor for device and user security.

The handset, which Boost and Virgin announced on March 14, can also be used as a mobile hotspot and runs on the Android Nougat 7 operating system. Both prepaid, no-contract carriers offer a variety of cellular service plans for customers.

One enhancement over earlier versions of the phone is the included stylus, which can be used to write, sketch, doodle or annotate on the device’s screen for capture and use in documents and emails, as well as for other tasks. The latest fiber tip on the stylus is thinner than the version used on the LG Stylo 2, allowing users to be more accurate and precise as they compose their inputs on the display.

To help prevent loss of the stylus, a pop-up message on the Stylo 3 will alert users when the stylus is separated from the device.

Boost Mobile offers a $35-a-month 4G LTE calling plan with 2GB of high-speed data and unlimited talk and text, and customers can add 1GB of high-speed data for $5 a month or 2GB for $10 a month. A $5 monthly discount is offered to those opting to use an auto-pay option. Additional lines under the plan are $30 per month. Also offered is Boost’s Unlimited Gigs no-contract, prepaid calling plan starting at $50 a month for the first line and $30 per month each for the second through fifth lines. The plans offer unlimited talk and text, and optimized streaming of videos, gaming and music.