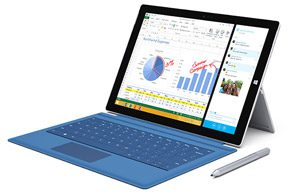 The Computex trade show in Taiwan draws a massive crowd, and Microsoft is working with OEM partners to showcase the scope and variety of the Windows device ecosystem.

Last month, Microsoft announced Windows 8.1 with Bing, a zero-cost licensing program that the company said paves the way for inexpensive Windows-based tablets and systems that feature Bing as the default search engine in Internet Explorer. “As we move forward, many of these lower-cost devices will come with a new edition of Windows called Windows 8.1 with Bing,” announced company spokesperson Brandon LeBlanc in a statement.

At Computex, Microsoft joined with device makers to show off the latest batch of devices sporting the company’s tablet-friendly Windows 8.1 operating system (OS). Highlights include Intel-based convertible PCs from Asus, HP and Dell.

The Transformer Book Flip from Asus, powered by Intel Core processors, features a display that “flips” 360 degrees and folds flat, enabling the device to double as a tablet. Transformer Book Flip will ship in three screen sizes: 13.3 inches, 14.0 inches and 15.6 inches. Asus also showed off the Zenbook NX500, the company’s first laptop with a 4K/UHD display. The 15.6-inch In-Plane Switching (IPS) screen features a resolution of 3,840 by 2,160 pixels.

HP unveiled the Pro x2 612, a 12.5-inch tablet that attaches to the company’s Power Keyboard. Both the tablet and keyboard portions pack a battery, allowing the device to go up to 14 hours between charges.

HP Pro x2 612, which ships in September, will be available with Intel Core i3 and i5 processors and an optional fingerprint reader. The PC maker’s convertible lineup for Computex also includes the 13.3-inch Split x2 and 15.6-inch Envy x360.

Dell was in attendance with two new touch-enabled convertibles, the 11-inch Inspiron 11 3000 and the 13.3-inch Inspiron 13 7000. The 7000 features a backlit keyboard and will include a passive stylus when it ships in September.

There are more devices to come from a growing list of OEMs. In a statement, Microsoft cited the “numerous tablets from partners in the China technology ecosystem in Shenzhen, Beijing and Shanghai, including Haier, VIDO and Luckystar” that Parker demoed at Computex.

Windows smartphones from BLU, InFocus, Prestigio and Yezz were also on display. “These new devices are the result of Microsoft’s expanded collaboration with Qualcomm on its reference design program, which enables device manufacturers to quickly and efficiently broaden their portfolio with Windows Phones,” added the company.