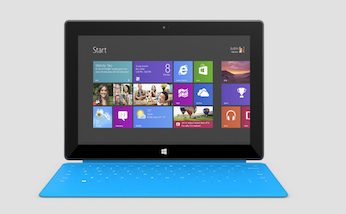 Microsoft has set out to mimic Apple’s success story—creating both software and the hardware it runs on—and with its new Surface tablet, it has outdone even Apple’s ability to turn hardware into dollars.

According to a teardown of the 32GB Surface performed by research firm IHS iSuppli, Microsoft makes more money on each Surface it sells than Apple makes on the iPad. Microsoft sells the 32B Surface with a black Touch Cover for $599. According to IHS iSuppli, with manufacturing costs included, it costs Microsoft $284 to make a Surface.

The bigger eyebrow-raiser may be the Touch Cover, which includes a keyboard and a touchpad in addition to protecting the display from scratches when not in use. Microsoft sells the Touch Cover for $119.99; IHS estimates that it costs Microsoft just $16 to $18 to make one.

Creating hardware that generates “high profits” is key to Microsoft’s strategy of transforming itself from a software maker into a devices and services provider, Andrew Rassweiler, an IHS senior principal analyst, said in a Nov. 5 statement.

“From a hardware perspective, Microsoft has succeeded with the Surface, offering an impressive tablet that is more profitable, on a percentage basis, than even the lucrative iPad based on current retail pricing,” Rassweiler said.

He added that even the Surface priced at $499 without the Touch Cover will generate a profit for Microsoft that’s “greater than the low-end iPad, in percentage terms and on a per-unit basis.”

An IHS teardown of Apple’s new WiFi-only 16GB iPad Mini tallied a bill of materials (BOM) of $198 with manufacturing costs. Apple charges $329 for the device. The third-generation iPad with 16GB of memory and Long Term Evolution (LTE), which Apple priced at $729, carried a BOM of $375.10, including manufacturing costs. That put Apple’s profit per tablet at nearly 50 percent, but still below the $315 Microsoft takes away from each $599.99 sale.

The major contributors to the Surface’s BOM are its display and touch-screen, which cost about $101each, the $34 of memory components and $36 in electro-mechanical components, IHS found. The contents that ship in the Surface’s box run Microsoft $25, the battery costs $20, and the user interface and sensors run another $20.

Among Microsoft suppliers, IHS found Samsung to be the biggest winner.

“Various divisions of Samsung supply components or complete subsystems for many of the most expensive portions of the individual tablet dissected by the IHS iSuppli Teardown Analysis Service: the display, the NAND flash and the battery pack,” said the report, adding that multiple sources also provide such parts and may contribute to other Surface tablets.

It’s rumored that Microsoft, as part of its reinvention—and money-making plans— will soon also offer its own smartphone.

“We think it is inevitable that Microsoft will launch its own smartphone in 2013 or 2014 at the latest,” Neil Mawston, executive director of Strategy Analytics’ Global Wireless practice, told eWEEK. “Microsoft is making little revenue from licensing its software, services and mobile advertising to smartphone makers, so it will need to get into the hardware business if it really wants to generate serious cash.”