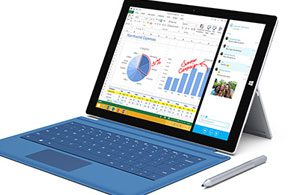 It’s no secret that the Surface Pro line of Windows tablets is aimed at businesses, albeit not exclusively. According to Cyril Belikoff, senior director of the Microsoft Surface division, the device is already making some early waves among health care companies.

Belikoff announced in a June 12 blog post that Pittsburgh-based University of Pittsburgh Medical Center, an integrated, nonprofit health care delivery and financing provider, is among the device’s early adopters. UPMC is deploying 2,000 Surface Pro 3 tablets, which will run the organization’s Convergence application and give doctors “quick access to the most important information they need about every patient they see,” he said.

Microsoft’s decision to avoid the mini-tablet market, at least for now, has yielded some early customer successes in health care.

Instead of unveiling the highly anticipated Surface Mini during a May 20 press event in New York, the company showed off the Surface Pro 3, effectively doubling down on enterprise tablets that run full-fledged Windows. The tablet, which sports a larger, 12.1-inch touch screen, was billed as a laptop replacement that fills the app-compatibility void between tablets and notebooks.

It’s a tactic that resonated with UPMC after hitting some technical barriers in an attempt to bring iPads into the mix.

Rebecca Kaul, UPMC’s chief innovation officer, admitted that her group encountered difficulty developing its Convergence application for the iPad and making it work in an enterprise setting. In the end, it offered read-only access to electronic health records, making it necessary to embark on a multistep process involving Citrix sessions to record data.

“We weren’t able to achieve a lot of the functionality—such as interfacing with the legacy systems—that we could achieve with the Surface on Windows 8,” she said in a statement. Ultimately, the Surface won out because of its “right balance of features in terms of size, form factor, and ability to disinfect.”

Seattle Children’s Hospital CIO Wes Wright said in a statement that the tablet will replace its laptops. “We look at weight. We look at battery life. Application compatibility. It was kind of a no-brainer for us.”