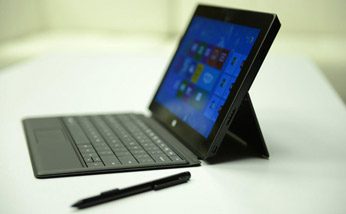 When Microsoft’s Surface Pro tablet goes on sale Feb. 9, it will face competition from a new, high-capacity version of Apple’s market-leading iPad.

On Jan. 29, Apple surprised the industry by unveiling a 128GB version of the fourth-generation iPad with a Retina display. The device will cost $799 for the WiFi-only model. Those who opt for the 4G Long Term Evolution (LTE) version will pay $929.

It’s a move that could see Apple’s tablet rocket to the top of IT buyers’ shopping lists.

In his analysis of the new 128GB iPad, eWEEK’s Don Reisinger said, “As Apple itself noted in a press release announcing its new slate, more than 85 percent of the Global 500 are currently deploying or testing the iPad. That figure could quickly jump to near 100 percent when companies get their hands on the 128GB version.”

Vast amounts of business data aren’t just taxing servers and storage systems. Just like big data is reshaping enterprise IT processes and infrastructures, it is also pushing the limits of mobile devices. Tablets with enough storage headroom to deal with bigger data demands and larger files could usher in a new, more productive era of enterprise mobility.

“Data-intensive applications might work effectively on tablets if they have enough storage capacity along with proper security measures. Having more storage is important to those firms. And Apple knows it,” observed Reisinger.

Unfortunately for Microsoft, Apple’s timing could derail its hopes of cornering the market for business tablets.

Microsoft does have a couple of reasons to be optimistic about the Surface Pro’s chances against the new iPad.

With an Intel Core i5 processor under the hood, Surface Pro is capable of running the full version of Windows 8 Pro. In effect, it offers seamless compatibility with a vast library of Windows software and laptop-like performance in a tablet form factor. Touch-enabled capabilities and pen input are icing on the cake.