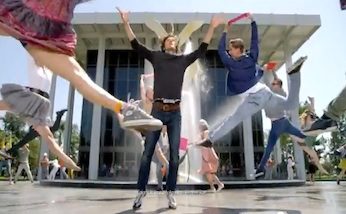 Apple and Android-running devices are making inroads with business users—The New York Times reported Oct. 16 that the BlackBerry-using President Obama likes to receive his national security briefings on an iPad—but Microsoft continues to be the “overwhelming choice” when it comes to standardizing on a mobile platform, according to ThinkEquity analyst Yun Kim.

Still, as Microsoft prepares for two big and very important software launches this month—Windows 8 for PCs and tablets and Windows Phone 8 for smartphones—it is consumers that its marketing dollars are visibly targeting. (For proof that this is an effective strategy, see Apple, which piqued consumer interest and support to the point of basically instigating the bring-your-own-device (BYOD) trend.)

The Microsoft Website, recently refreshed after years as essentially a dusty relic, now features a bright Windows palette with smiling families, college kids, enticements to download Lady Gaga tracks, and the occasional small-business owner. And with a new commercial for its Windows 8-running Surface tablet, posted to YouTube before dawn Oct. 16, there’s no mistaking the intended audience: the teen, tween, Glee-watching set.

Whether the ad creates a cool quotient that can take on the iPad—or at least undo some of the damage of Apple’s “Get a Mac” campaign—is for the viewer to decide. Certainly, though, it’s effective in making clear that the tablet has a complementary keyboard that attaches magnetically and securely with a satisfying click—a click that sets off coordinated dance scene extravaganza in a sort of Los Angeles college quad meets public piazza, complete with break dancers, kissing seniors and plaid-skirted, club-ready school girls.

The end of the commercial tells people to “click in” at Microsoft.com, and “coming 10/26.” If you click in at Microsoft.com today, there’s precious little about the Surface—zero mention of it on the home page—and definitely no information about pricing. This has ThinkEquity’s Kim concerned.

“We see Microsoft facing an updated Amazon Kindle Fire HD and a new tablet (Nexus 7) from Google [both of which] are priced at $199,” wrote Kim. “Currently, we believe most investors are expecting Apple to release iPad Mini Oct. 23, and it is expected by the media to be priced at around $350.”

Given that tablets created by Microsoft’s competitors and running Windows RT—the version of the OS that runs on the ARM architecture, as opposed to x86 processors from Intel and Advanced Micro Devices—are priced around $500, Kim wrote, “Microsoft is facing a pricing dilemma.”

If it prices the Surface too high, it takes a risk on sales figures; too low, and it risks hurting revenue growth. Given this quandary, wrote Kim, the firm has lowered its “already modest Windows estimate” for Microsoft’s fiscal second quarter, which ends in December, “to reflect a more highly competitive tablet market for the upcoming holiday shopping season.”

Still, given the “surprising” findings of its IT manager survey, ThinkEquity expects Microsoft to continue to dominate the corporate PC environment as the platform shifts from desktops and laptops to mobile devices, said the report.
“Also, we believe Microsoft could leverage its strength in the enterprise market to successfully penetrate the consumer market,” Kim added, “which many investors believe is a lost endeavor.”