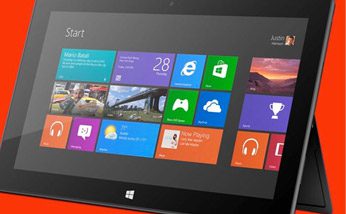 Microsoft has a long way to catch up to Apple in the tablet market, but there are signs that the company’s efforts are starting to pay off.

IDC revealed on May 1 that Microsoft managed to crack the top five list of tablet vendors for the first quarter of 2013 (1Q13) with shipments of 900,000 Surface tablets. While only a tiny fraction compared with the number of iPads that Apple managed to ship during the same period, it’s an indication that the maker of Windows software is gaining a foothold in the competitive mobile market.

Microsoft has some tough challenges and rivals to overcome if it hopes to climb the rankings and turn Windows into a formidable presence in a market dominated by Apple iOS and Google Android. In comparison, Apple shipped 19.5 million iPads in the first quarter, followed by Samsung, whose mobile product portfolio is anchored by the Android mobile operating system, with 8.8 million tablets.

Despite shedding a significant share of the tablet market—39.6 percent in 1Q13 versus 58.1 percent in 1Q13—Apple outperformed IDC’s own forecast of 18.7 million iPads for the quarter. “Sustained demand for the iPad mini and increasingly strong commercial shipments” contributed to Apple’s rosy numbers, said IDC Research Director Tom Mainelli in a statement.

The market research group found that among all vendors offering Windows 8/RT tablets (Microsoft included), Windows tablet shipments totaled 1.8 million during 1Q13. Since Surface sales make up half that number, the data suggests that partner OEMs are having a tough time drumming up interest in Windows-based slates.

“Beyond the Surface products, Windows 8 and Windows RT tablets continued to struggle to gain traction in the market,” said IDC in a statement. And don’t expect small Windows tablets, including the rumored Surface Mini, to set the market on fire, warned IDC Mobility Tracker Program Manager Ryan Reith.

“Recent rumors have circulated about the possibility of smaller screen Windows RT and Windows 8 tablets hitting the market. However, the notion that this will be the saving grace is flawed,” said Reith in press remarks.

In recent months, the industry has been abuzz at the possibility of small Windows-based tablets to rival successful, downsized slates like Amazon’s Kindle Fire, Google’s Nexus 7 and Apple’s iPad Mini. In its March 12 Windows Certification Newsletter, Microsoft relaxed the requirements for Windows 8 tablets, paving the way for 7-inch Windows tablets, including a Surface Mini.

“Clearly the market is moving toward smart 7-8 inch devices, but Microsoft’s larger challenges center around consumer messaging and lower cost competition. If these challenges are addressed, along with the desired screen size variations, then we could see Microsoft make even further headway in 2013 and beyond,” stated Reith.

Boston-based Strategy Analytics painted a better picture of Windows 8/RT tablet shipments during the first quarter. The research firm claims that 3 million Windows tablets shipped during the period, for 7 percent of the market from practically zero before the Windows 8 launch.