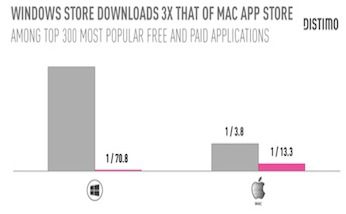 Microsoft’s month-old Windows Store is performing well and has the potential to keep doing so, according to Distimo, a Netherlands-based research firm.

Microsoft had a company-changing late October during which it introduced Windows 8, its new operating system for PCs; Windows Phone 8, a new OS for smartphones; and the Surface, a tablet that for now is only available in a version running Windows RT, an ARM-based version of the OS.

The Surface RT only runs Windows 8 applications—nothing older—which are available in the Windows Store, which opened for business Oct. 26.

There are already more than 20,000 applications in the Windows Store—a pittance compared with the mobile app stores of Apple and Google but a feat compared with Apple’s Mac App Store.

“The Apple Mac App Store has been around for almost two years now, but only stores 12,998 applications, i.e., within a couple of months between the announcement and the official launch of Windows 8, Microsoft managed to already outperform the Mac App Store in the number of available applications,” stated Distimo’s Nov. 28 report.

However, when paid applications were looked at alone, the Apple Mac shop was doing five times better than the Microsoft equivalent.

The report also applauded Microsoft for giving good visibility to local content. Overall, 10 percent of Windows Store apps are locally directed, though when smaller countries—less likely to have local content—are taken out of the equation, the percentage jumps. In Japan, for example, 41 percent of the top 300 apps are “locally popular only,” said the report, and in Korea that figure is 30 percent.

“Not only is Microsoft doing a good job in promoting local content,” said the report, “it also means that Microsoft successfully persuaded local publishers to develop for a platform and an app store that still has to prove itself.”

The firm also looked at the difference between paid and free applications, and noted that, in pricing and the popularity of apps, the Surface tablet section of the store—with its apps designed for the ARM architecture instead of Intel—is much more like Apple’s App Store than its Mac App Store.

Most stores have a greater percentage of paid apps than free ones, says the report. In the Apple Mac Store, 84 percent of content is paid, and even in Google Play, with its emphasis on its free offerings, about 35 percent of apps have a price tag.

In the Windows Store, however, 14 percent are paid apps and 86 percent are free. And again, there’s a distinction between the Surface and desktop apps—the average app price for the former is $4.87, while it’s $14.29 for the latter.

When the top 100 apps in both categories are averaged, however, the story changes. The top desktop apps average $3.67 and the top Surface apps $2.98.

In summary, Distimo concluded that the Windows Store has “a lot of potential.”

“This is not only because the number of potential customers will quickly grow because of the reach of Windows, but also because Microsoft seems to have copied a few best practices from its competitors and implemented them well,” the analysts wrote. “Splitting the tablet and desktop store and focusing on local content are both promising strategies.”