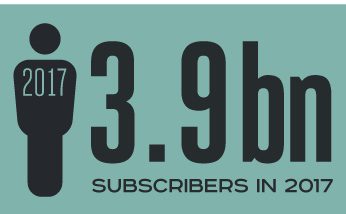 BARCELONA, Spain — Revenue for the entire mobile ecosystem totals $1.6 trillion, or 2.2 percent of the global Gross Domestic Product, according to a report released here by Mobile World Congress operator GSMA in conjunction with A.T. Kearney.

With the number of mobile subscribers standing at 3.2 billion people, nearly half the world’s population now uses mobile communications. It is expected that a further 700 million subscribers will be added by 2017 and the 4 billion-subscriber milestone will be reached in 2018. Mobile subscriber penetration stands at 45 percent globally, while mobile connection penetration is now 94 percent.

At the end of 2012, there were 6.8 billion mobile connections worldwide, a figure expected to grow to 9.7 billion by the end of 2017. Mobile broadband accounted for 1.6 billion of these connections in 2012, increasing to 5.1 billion in 2017, including 920 million LTE connections. The proliferation of mobile broadband is enabling an explosion in data traffic, and in 2012, 0.9 exabytes (one quintillion bytes) of data traversed mobile networks every month. This is expected to increase by 66 per cent to 11.2 exabytes per month in 2017.

“The mobile industry’s economic impact reaches far beyond its already-impressive $1.6 trillion in revenues, to boost individual well-being, corporate productivity and government funding,” Mark Page, the leader of A.T. Kearney’s communications, media and technology practice and co-author of the report, said in a statement. “As the market expands with the spread of smartphones, 4G networks and innovative applications across the globe, the challenge for mobile operators is to stake their claim to a share of the associated revenue growth. Cross-industry initiatives … will be essential to operators in ensuring a central position in the mobile ecosystem value chain.”

Through 2017, the mobile industry’s capital spending will reach $1.1 trillion and it will contribute $2.6 trillion to public funding. In 2017, companies across the ecosystem will employ nearly 10 million people globally, the report said.

“Mobile is a vibrant and evolving industry at the heart of everyday life for billions of people around the world,” GSMA Director General Anne Bouverot said in a statement. “Mobile has gone beyond being a mere communications tool to one that provides life-enhancing, and in some cases life-saving, services to men, women and children. It’s exciting to look at the possibilities ahead of us as we connect the world’s population to the mobile Internet.”

The report also highlighted several factors critical to the further growth of the industry. With the growing adoption of mobile broadband and the dramatic rise in data traffic, the report said the future of mobile will depend on operators having timely and reasonable access to the necessary spectrum resources. Another essential element in enabling growth is a transparent, consultative and predictable regulatory environment, addressing spectrum licensing, competition, taxation and intellectual property.