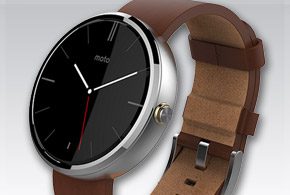 Moto Maker arrived back in August 2013 as an online destination where customers could then personalize their Motorola Moto X smartphones before they were shipped.

The Moto 360, with its classic round watch face styling and $249.99 starting price, will be the first Motorola smartwatch that’s available through Moto Maker, according to the company.

“You have a style all your own,” states a March 10 post about the new Moto Maker option for the Moto 360 on the Motorola Blog. “Now, you can customize a modern watch that satisfies your personal tastes and have it delivered to your door step. Introducing Moto Maker for Moto 360.”

Using the Moto Maker Website, buyers can choose the color of their Moto 360’s stainless steel body, color and size and material of the included watchband and they can choose the background color and appearance of the changeable watch face.

The watch bodies are available in three colors: dark metal, light metal or champagne gold, while nine different watchband styles and widths are available in leather, metal or a new mono-link design, which is a modern take on the look of a classic metal band. Buyers can also choose to set their watch up initially with one of 11 watch faces, but those are again changeable later by downloading and installing the watch face images on the smartwatch from special collections from Motorola or through the Google Play store.

Different configurations of watchbands and body colors can increase the price of a Moto 360 to as much as $329.99 for a champagne gold body and a metal band.

A Motorola spokesperson could not be reached by eWEEK for further comment on March 11.

The Moto 360 smartwatch includes a 1.56-inch round face display with 320 by 290 resolution, as well as a face cover made from Corning Gorilla Glass 3. The device runs the Android Wear operating system and can be used alongside smartphones that are running Android 4.3 or higher. The smartwatch includes a Texas Instruments OMAP 3 processor, 512MB of RAM, 4GB of built-in internal storage and a 320mAh battery that reportedly can operate the watch all day in mixed use. The device comes with a wireless charging dock.

The Moto 360 case measures 1.81 inches across and 0.45 inches in thickness. A leather band-equipped version weighs 1.7 ounces.

It is also equipped with a built-in pedometer, an optical heart rate monitor (PPG) and meets IP67 water-resistance standards. The Moto 360’s heart activity app tracks a user’s progress using daily and weekly benchmarks so they can track their fitness and training.

The Moto 360 provides timely updates to users on its watch face display, including weather, flights, traffic alerts and more. The smartwatch also includes voice control capabilities that allow users to send texts, set a reminder, check the weather or ask for directions.

The Moto 360 will soon get a lot more competition in the smartwatch marketplace when Apple’s long-awaited Apple Watch is released on April 24. Preorders for the Apple Watch begin on April 10.