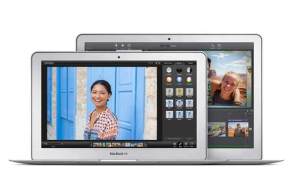 The overall size of the next MacBook Air will even be smaller than the existing 11-inch MacBook Air models, according to a Jan. 6 report by VentureBeat.

“Rumor has it that sometime in the spring, Apple will release a new MacBook Air that will have a 12-inch display (it currently offers 11- and 13-inch screens), and that the design will be overhauled to make the laptop thinner,” the story reported. “The body will be noticeably smaller than the current 13-inch laptop, but will also be narrower (by a quarter of an inch), yet taller (also by a quarter of an inch) than the current 11-inch version to accommodate for the larger display.”

Since its first iteration several years ago, the MacBook Air has continued to push the envelope of smaller, denser sizes, while also reducing weight and bulk for users. The next editions of the devices appear to push those goals even further, the report said.

In fact, the rumors insist that coming MacBook Airs will include an edge-to-edge keyboard that eliminates much of the spaces between the keys and the edges of the body, as well as narrower keys, a slightly differently shaped trackpad with no clicking sound, relocated speaker grills and ventilation holes, and fewer ports than previous models, the story reported.

One of the biggest changes will come in the port configurations, the story said, because Apple appears to be removing every external port on the MacBook Air chassis except for the headphone jack and dual microphones. That means future Airs will replace their standard USB ports, SD card slots and Thunderbolt and MagSafe charging ports with a USB Type-C port, according to the report. In addition, the rumored USB Type-C port is smaller and faster than existing USB 2.0 and 3.0 ports and could also be used to connect external displays and also to charge the next Air devices, the story said. Future Air devices are also rumored to be made available in the new Space Gray color Apple introduced previously for some iOS devices, the story added.

The rumors also call for the updated devices to ship by mid-2015.

The present ultrathin MacBook Air was unveiled by Apple back in April 2014, with new, better internal components and a new starting reduced price of $899, making the computer far more accessible to customers on a budget, according to an earlier eWEEK report. That $100 price drop was welcome for buyers, and has helped Apple maintain the Air as a major revenue generator for Apple’s Mac line. Although the MacBook Air was initially designed with consumers in mind, the device is also a suitable fit for business users because of many advantages, including its mobility, bring-your-own-device and security benefits and other features.

Its lighter weight compared with traditional corporate laptops is a key selling point for many users and helps put the MacBook Air squarely in the sweet spot of what enterprises are seeking for their users.