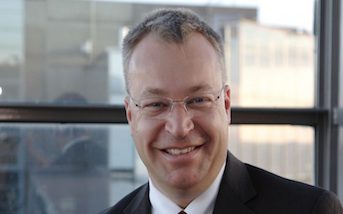 Nokia CEO Stephen Elop’s recent comments in Australia suggest he may not have been “mistranslated” after all back in January, as the Nokia PR machine had hurriedly suggested, following an interview with the Spanish newspaper El Pais in which Elop said that Nokia would consider using Google’s Android mobile operating system.

The paper had quoted Elop as saying, regarding Android and other options, that Nokia was “committed and satisfied with Microsoft but anything is possible.” A Nokia spokesperson quickly afterward described Elop’s comment as “mistranslated … leading to some erroneous reports and speculation about our strategic direction.”

Speaking at an event in Sydney Feb. 4, Elop said that in the coming months Nokia would broaden its portfolio, and that tablets are likely to be a part of that.

“We haven’t announced tablets at this point, but it is something we are clearly looking at very closely,” Elop said, according to a report from the Australian Financial Review.

Regarding the operating system such a tablet would run, Elop said the reasons that Nokia chose to back Microsoft with its smartphones would also be relevant to its tablet choices.

He went to say, “Our first focus on what we look at is clearly in the Microsoft side.” But he also added that Nokia “would consider any option,” meaning Android or Windows. After reportedly being coaxed by a public relations person, he added, twice, “But we have made no decision or announced nothing.”

While it’s perhaps important to Elop to make clear that Nokia isn’t cemented to Microsoft and can consider all options, he offered a decent argument for not choosing Android for future tablets in saying that he felt “vindicated” in the decision not to choose Android for Nokia’s smartphones, given the way that Samsung has dominated the Android market “at the expense of everyone else.” He said it was exactly a pattern that Nokia had feared would form.

Should Elop need another reason to stick with Windows as its tablet platform, Forrester offered one in a Feb. 4 report. Interviewing nearly 10,000 information workers worldwide, it found that while the majority of workers want an Apple iPhone to be their next smartphone, a majority want a Windows-based tablet to be their next work tablet.

“Apple’s presence in computers, smartphones and tablets makes it a critical supplier to the enterprise,” said the Forrester report. “Android, too, has and will continue to have a big share in mobile devices, and Windows will be a rising force in tablets.”