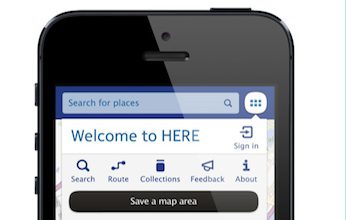 Nokia has invested billions in mobile mapping, so when Apple bungled its Maps app in iOS 6, it seemed a golden opportunity for Nokia—with new smartphones and a new operating system behind them—to show the world that that it’s again capable of competing at the top of the market.

Alas, while Nokia managed to submit its Here maps app to Apple’s App Store ahead of a new Google Maps app, early reviews suggest it wasn’t able to translate the mapping experience on its Lumia devices into the world of Apple.

The Here app shot to nearly the top of Apple’s most downloaded apps list when it was introduced Nov. 19. Within two days, the free app had nearly 1,000 ratings, the majority of which were poor. It had more one-star ratings than five-, four-, three- and two-star ratings combined.

“This app is slow to scroll in and has NO information! For example, there aren’t even streets in Japan. It’s basically a blank map for blind people. Try this out if you want to feel like your Apple Maps is Google’s. Seriously, immediately delete!” wrote one aggravated user.

Another, still generous enough to give it two stars, wrote, “Apple probably let this in so that people would see what a bad map app REALLY looks like. … If Google doesn’t bring vector graphics with their maps, then Apple has nothing to worry about—and this is proof.”

Not everyone was so disappointed. As of mid-afternoon Nov. 21, 214 people had given it five stars.

“Finally accurate maps are back as an app for iOS. Both Google and Apple don’t get my neighborhood right. HERE Maps does!” wrote one satisfied customer.

“It is the best substitute for google maps on iOS to me now!” wrote another. “Everything works well but the image is a little blurry. However apple maps is far behind. Now my iPhone is alive again!”

Journalists, arguably approaching the app with some neutrality, mostly sided with the disappointed.

Wired‘s Alexandra Chang called it a “buggy eyesore” and “a wreck,” adding, as many iTunes commenters did, that the Here maps seemed “blurry,” lacking the sharpness of Apple’s Maps.

In a statement sent to The New York Times, Nokia spokesperson Doug Dawson explained that the Here app is based on Web technology and Nokia is working to make it be on-par with the map application it offers on its Lumia smartphones.

“As the leader in location and navigation services, Here is committed to regularly improving our mapping experience across all platforms to achieve the same high-quality experience of the native applications found on our Lumia range of devices,” Dawson said in a statement.

In a Nov. 13 statement announcing the development of the Here app, Michael Halbherr, executive vice president of location and commerce for the Here brand, acknowledged, “Maps are hard to get right—but location is revolutionizing how we use technology to engage with the real world. That’s why we have been investing and will continue to invest in building the world’s most powerful location offering, one that is unlike anything in the market today.”