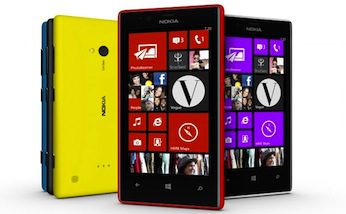 Wireless carriers in the United States have repeated their desire to support a third major platform, alongside Apple’s iOS and Google’s Android, and Nokia is in a fierce competition with BlackBerry—and possibly others—for the position.

However, at the 2013 Mobile World Congress event Feb. 25, Nokia instead chose to focus on developing markets, introducing four affordably priced devices—the Lumia 720 and 520 and the Nokia 301 and 105—that borrow features from Nokia’s high-end line.

The company also announced that its Here location app suite will be available to non-Nokia Windows Phone devices.

“By offering better experiences at a more affordable price, we are reinventing the battle for affordable mobile devices, and Nokia has the building blocks to win,” CEO Stephen Elop said in statement.

The Lumia 720 offers a high-end camera experience with a an f/1.9 aperture lens, exclusive Carl Zeiss optics that help to take crisp photos in low light, and an HD-quality, wide-angle front-facing camera. The 720 also includes Nokia Music, the company’s free streaming music service, Nokia’s Here location suite and the option of having its back cover swapped for a version that enables wireless charging.

The Lumia 720 will come in a choice of five colors, will sell for about $325, and begin shipping during the first quarter in Hong Kong, Singapore and Vietnam before moving on to more countries—including China, where it will be offered by China Mobile, the largest carrier in China and the world.

The Lumia 520, Nokia’s most affordable Windows Phone 8 device to date, will sell for about $180. It will also get the five-color treatment and include Here and Nokia Music, as well as feature the same digital camera lenses that are in the Lumia 920 and a 4-inch touch-screen that offers a “more responsive and immersive content experience than can usually be found at this price,” said Nokia officials.

It will begin shipping in Hong Kong and Vietnam before moving on to more key markets in Asia, Europe, Latin America and Africa.

The Nokia 301, priced at about $85, features a 3.5G connection, the Nokia Xpress Browser—which offers up to 90 percent data efficiency by crunching data in the cloud—and smart camera features, including a lens inspired by those on its pricier siblings. And finally, the Nokia 105—Nokia’s cheapest phone to date, at roughly $20—is aimed at first-time phone buyers. It has a 35-day battery, an FM radio, multiple alarm clocks, a flashlight and a pillowed keypad, among other features.

“The momentum behind Nokia is gathering pace,” said Elop, adding that the new devices will help Nokia to “meet the demands of people and business around the globe.”

The phones will help Nokia compete for a low-end device market that Piper Jaffray analyst Gene Munster identified as a $135 billion opportunity in 2013—making it likely that Nokia soon won’t just be trying to compete against Apple with its flagship products. Munster expects that in September Apple will launch an unlocked $199 iPhone, enabling it go after exactly the markets Nokia and others are already targeting.

In an interview following Nokia’s announcements, The Verge pressed Elop about its lack of news for the other end of the market, and specifically the hoped-for Nokia tablet announcement that didn’t materialize.

“What we’re doing right now is watching very closely some of the dynamics that are taking place in the tablet market, particularly with the introduction of Windows 8, the new Surface products from Microsoft, and so forth, ” Elop told The Verge, with a kind of studied-in-the-bathroom-mirror enthusiasm.

“We’re really trying to understand the dynamics of that market, and to make sure that if we were to enter that market, we would do so in a very differentiated and compelling way,” he continued. “So it’s an area to continue to study, but it’s still an opportunity for us.”