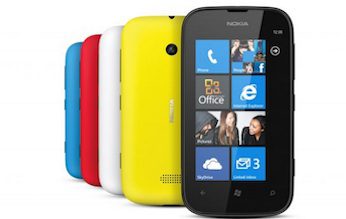 Nokia introduced the Lumia 510 for emerging markets Oct. 23. While that’s a group Nokia has so far addressed with its Asha line, with the 510, it’s showing it has figured out how to fit the Lumia Windows Phone experience into a device for $199. That’s not $199 after subsidy with a contract; that’s $199 retail, no strings attached.

The Lumia 510 is the cheapest smartphone yet to run Microsoft’s Windows Phone operating system, but it may still prove a reach for some users in India and China, where it will arrive in November. Research firm IDC, reporting in September that 80 percent of households in China will be able to afford a smartphone by 2017, wrote that intensifying competition is driving Android-running phones closer to $100 price points. While the market in China has been dominated by $300 phones, IDC added, Huawei, ZTE, Samsung, Nokia and others have been offering phones for nearer to $160.

After India and China, the Lumia 510 will arrive in other Asia-Pacific countries and South America.

The Lumia 510 runs Windows Phone 7.5—a version of the operating system that won’t be able to make the upgrade to Windows Phone 8, when Microsoft releases it Oct. 29. For the intended markets, this may not matter. Research In Motion has proven that developing regions are game for an OS with little room to grow, if it’s paired with a phone that has features they need. During RIM’s last fiscal quarter, it increased its user base by 2 million, selling smartphones that won’t be upgradeable to its upcoming BlackBerry 10 platform.

The Lumia 510 features a 4-inch WVGA (wide video graphics array) capacitive touch-screen with a resolution of 800 by 480. (Asha phone displays are in the 3-inch range.) There’s a 5-megapixel rear-facing camera with a physical shutter button, a Snapdragon S1 processor, 256MB of RAM, 4GB of mass memory and 7GB of free storage on Microsoft’s SkyDrive cloud solution. As with the other Lumias, there are lots of color choices: red, yellow, cyan, black and white.

This is, remember, a Lumia phone, making it “unlike any other entry-level Windows Phone,” Nokia said in an Oct. 23 statement. Apps like Nokia Maps, Nokia Drive and Nokia Transport are on board, and users can download Camera Extras—apps that offer “exclusive digital lens functionality.”

Nokia is looking forward to selling phones, period. Microsoft’s Windows Phone 8 launch has had Nokia biding its time until the OS’ release, unable to sell its WP 8 phones and little able to move phones running WP 7.5, particularly once Microsoft shared the upgrade news this summer.

CEO Stephen Elop, in an Oct. 18 statement, said the third quarter was “as we expected … a difficult quarter.” However, he added that positive response to new Asha touch-based smartphones “translated into strong sales.”