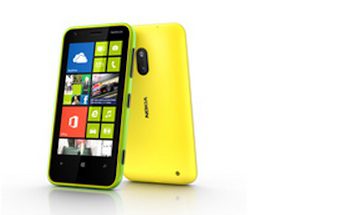 For the Lumia 620, Nokia developed a new dual-shot color technique, which it describes as adding “a second layer of colored, transparent or translucent polycarbonate on top of a base layer to produce secondary color blends and depth effects.” As with earlier Lumias, this also means that scratches won’t show—the color doesn’t sit on top, it runs through the body.

Or rather, through the shell. The exterior of the 620 can be popped off and a different color (sold separately) can be popped on. Colors will include lime green, orange, magenta, yellow, cyan, white and black.

The 620 also comes with many of the features of its more high-end siblings. These include Nokia’s extensive mapping applications, City Lens—information about all that can be seen through the camera lens at the moment, from restaurant reviews to bus schedules—Nokia Maps, Nokia Drive and Nokia Transport.

The 620 weighs 4.5 ounces and measures 4.5 by 2.4 by 0.4 inches. It will be priced around $249 and go on sale in January in Asia, followed soon afterward by Europe and the Middle East and then more markets from there.

“We continue to execute on our strategy to reach new audiences and new markets,” Jo Harlow, Nokia’s executive vice president, said in a Dec. 5 statement. “The Nokia Lumia 620 is a highly competitive smartphone at this price point.”

With the Lumia 920T for China Mobile—China’s largest carrier—Nokia hopes to go after what during the third quarter become the world’s largest smartphone market.

“People around the world are responding positively to the new Lumia devices, and we’re confident that the enthusiasm will extend to China with the Lumia 920T,” Nokia CEO Stephen Elop said in a Dec. 5 statement.

To complement the latter, Nokia has made a deal with Air China, which will include wireless chargers in its Beijing Airport VIP lounges.

With the late-October launch of Windows Phone 8, Nokia can finally do its best to proceed full steam ahead as it works to regain market share lost over the last few years to Apple’s iPhone and Android-running devices. These efforts recently included selling and re-leasing its headquarters. Real estate, the company said in a statement, is not part of Nokia’s “core business.”