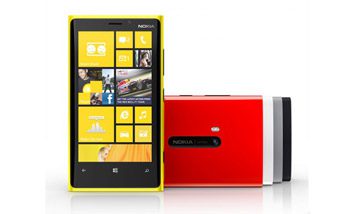 With Google Android handsets and the Apple iPhone 5 dominating the smartphone market, Nokia is looking to get back into the game it was once master of with the release of the Lumia 810 exclusively on T-Mobile’s network. The Lumia 810, which T-Mobile said would become available in the coming weeks, runs Microsoft’s new Windows Phone 8 operating system and sports a thin design and improved navigation and camera features.

The handset features a 4.3-inch OLED WVGA Clear Black display, along with exchangeable shells in cyan and black, which also allow the device to use Nokia’s wireless charging solution. The main 8-megapixel camera, engineered with Carl Zeiss optics, is complemented by a few new features: Cinemagraph, a lens that creates animated GIFs, as well as panorama settings, and Group Shoot, which allows users to choose the best faces and smiles from a burst of photos and stitch them together to produce one group shot. In addition, a 1.2-megapixel Skype high-definition certified front-facing camera provides users with mobile video chat capability.

“We’re providing our customers with a unique Windows Phone 8 experience by offering an exclusive device paired with our Unlimited Nationwide 4G Data plan and a comprehensive set of enhanced features,” T-Mobile USA’s vice president of product management Andrew Morrison said in a statement. “The Nokia Lumia 810 gives customers speedy, 4G access to T-Mobile’s nationwide network and the content and features they want, whenever they need it. From navigation tools to an enhanced camera, the Lumia 810 provides a great value and a high-quality experience.”

Rounding out the smartphone’s features are updated navigation features, including City Lens, which overlays information about restaurants, shops, hotels and more on the surfaces of buildings; Transit, which provides directions to a location using public transportation; and Drive, a voice-guided, turn-by-turn navigation system. The importance of high-quality mapping and navigation technology was highlighted last month after Apple’s self-designed replacement for Google Maps on the iPhone 5 left users less than satisfied.

The Lumia 810 also comes with Nokia Music, which features playlists curated by a team of global and regional musicologists and spans a spectrum of musical genres. The service requires no registration or subscription and is offered completely advertisement-free, and can also be used offline.

“The Nokia Lumia 810 features a sleek design and high-quality hardware, combined with the efficient and intuitive Windows Phone 8 operating system,” Nokia Americas President Olivier Puech said in a statement. “When combined with applications such as Nokia Drive and Nokia City Lens, the Lumia 810 ensures that T-Mobile customers are getting the best experience possible out of their smartphone.”

Nokia isn’t the only handset manufacturer getting ready to release high-powered smartphones running Windows Phone 8. HTC recently unveiled the 8X handset, which will go on sale in November. To complement the company’s first Windows Phone 8-supporting smartphone, HTC will also be offering the 8S, a smaller, cheaper version of the flagship 8X. Both models are expected to compete directly with Nokia’s flagship Lumia 920 and 820 handsets as the two tech giants battle to gain traction in an increasingly competitive—and crowded—smartphone market.