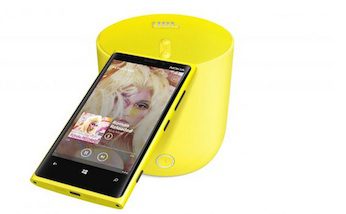 Nokia officials, who are hoping that their Windows Phone-based Lumia phones will help the company reverse its falling fortunes, are rolling out enhancements to a music service they first introduced last year.

Nokia executives announced Sept. 5—the same day they showed off the Lumia 920 and 820 and a range of speakers and wireless chargers—that they were bringing their free streaming Nokia Music service to the United States.

The service offers more than 150 playlists created by “an expert team of U.S.-based musicologists,” as well as a library of millions of song with which users can make playlists of their own, free of charge, with no advertising and no subscription or registration required.

On Jan. 27, Nokia announced that it was offering a few enrichments to the service, and with them, a way for Nokia to finally make a few bucks off of it.

For current Nokia Music fans, nothing will change. Nokia Music+, “which brings a slew of new and richer options for a low monthly subscription fee of $3.99,” Nokia’s Ian Delaney wrote in a blog post, “is all about adding extra.”

With Nokia Music+, users get an unlimited number of skips—if they don’t care for a song, they can instantly skip to the next one—and unlimited downloads. Nokia Music allows users to download up to four Mixes, each of which contains hours of music, and to play them even without an Internet connection. With Nokia Music+, there’s no limit on the number of downloads.

Still more perks: Pay those few dollars a month and Nokia will enable you to download music at eight times the speed; access the music through a desktop app, when your phone isn’t at hand (or when it is); and view the lyrics of any song.

You get “words to the songs you’re listening to, right on your Nokia Lumia,” wrote Delaney. “Either in a scrolling list, Karaoke-style format or a display you can scroll up and down.”

“It’s the only smartphone music service out there offering access to millions of songs out of the box without the need to sign up, sign in or suffer adverts in between enjoying the music. When you add in the ability to skip songs and save playlists for offline uses like the tube, you have something unique,” Jyrki Rosenberg, Nokia’s vice president of entertainment, said in the blog.

Rosenberg said that Nokia Music+ was a result of studying how people were using the original service.

“We spend a lot of time listening to how people use the service and have even managed to half the amount of skips per songs played,” he added, “which is a combination of our systems and musicologists understanding and shaping Nokia Music around the users.”

Nokia will begin offering the service-extra in the next few weeks.

Nokia announced Jan. 24 that during its fiscal 2012 fourth quarter it sold 6.6 million smart devices, 4.4 million of which were Lumia handsets. CEO Stephen Elop said during Nokia’s earnings call that people “are responding positively” to Nokia’s particular value-adds, which include its imaging capabilities and navigation features, and that Nokia is making sure to add differentiators—like Nokia Music—to its Windows Phone devices.