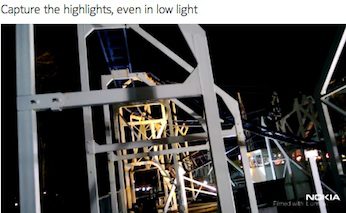 Nokia, now that it can no longer pretend the Nokia Lumia 928 doesn’t exist, has taken the next step in trickling out information about a smartphone it has yet to officially introduce.

First, it has posted a photo of the 928 on its Website. An aside: It never outright calls the phone the 928, sticking to just “Nokia Lumia,” but the URL for the photo ends in “lumia928,” clarifying what Nokia for now prefers to stay vague about.

The photo shows black and white versions of the 928, which is certainly thinner than its predecessors.

What follows is video from a night at the Adventureland theme park in New York, riding the Hurricane rollercoaster. Having no doubt learned a thing or two since its last video-marketing debacle, this is a far lower-quality effort, more obviously filmed with a smartphone and not a professional camera. But to clear up any doubts, Nokia stamped the bottom, right corner with “Filmed by Lumia.”

After a turn on the ride, Nokia rewinds the footage, comparing it first, side by side, to footage from the Apple iPhone 5 and then the Samsung Galaxy S III.

The little more that we definitively know about the 928 is that—as Nokia says in the intro to the video—it features an 8.7-megapixel PureView camera with Carl Zeiss optics and Optical Image Stabilization.

It’s expected that Nokia will introduce the 928 at the May 14 event in London that last month it sent out digital invitations to.

Nokia needs a Windows Phone-running hit, and with the 928 it may find one. (A television host in Finland recently pressed Nokia CEO Stephen Elop, telling him, “I want to have a Nokia phone because I believe in you and I believe in Nokia … but I want to have that 928. When do I get it?”)

The wiggle room in that statement, however, has Nokia investors nervous, if not losing patience.

During an investor shareholder meeting in Helsinki May 7, Elop’s decision to stick with Microsoft’s Windows Phone and Windows Phone only was questioned.

“You’re a nice guy … and the leadership team is doing its best, but clearly it’s not enough,” shareholder Hannu Virtanen told Elop, according to a Reuters. “Are you aware that results are what matter? The road to hell is paved with good intentions. Please switch to another road.”

According to the report, Elop didn’t respond directly but later told shareholders, “We make adjustments as we go. But it’s very clear to us that in today’s war of ecosystems, we’ve made a very clear decision to focus on Windows Phone with our Lumia product line. And it is with that that we will compete with competitors like Samsung and Android.”