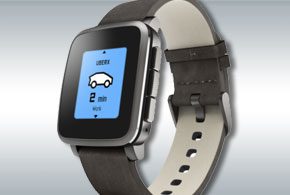 The Pebble Time Steel is a variant of the company’s Pebble Time smartwatch that was unveiled in June, which includes a stainless steel bezel and a non-metal body.

The Pebble Time Steel was first offered through a Kickstarter program for early backers of the device.

Shipments for the new smartwatches are expected to begin in mid-September, according to the company.

The original Pebble Time sells for $199.99 and is available in the United States at Best Buy stores or on BestBuy.com, as well as through Pebble.com around the world. The original model will also go on sale in Target stores and on Target.com during the week of Aug. 17, according to an earlier eWEEK report.

The Pebble Time Steel is the company’s fourth smartwatch model.

Like other Pebble timepieces, it includes a full-color e-paper display, voice control capabilities, fitness tracking and a timeline feature that lets users toggle through their past, present and upcoming events in their lives on the watch face. Timeline features include information about missed calls, app alerts, personal calendars, breaking news, sports scores and weather information, with more to be added in the future.

The Pebble devices work with compatible iOS and Android smartphones, although not all iOS notification features will work. They work with Apple’s iPhone 4S and above running iOS 8, and with all Android devices running Android 4.0 and above.

The company’s smartwatches are also built with protection against water damage and can be worn in the shower, in swimming pools or during outdoor activities in inclement weather. They have water resistance to 98.4 feet, or about 30 meters, according to Pebble.

The Time Steel uses a magnetic USB cable for charging its battery.

Activity tracking is also provided by the Pebble Time when it is used in conjunction with an activity-tracking app from Jawbone, Fitocracy, Runkeeper or Misfit so that users can track and record their walking, steps, bicycling and sleep hours to monitor their health and fitness goals.

Streaming music apps from Pandora, iHeartRadio and others can also be used with the Pebble Time so that wearers can control their music from their wrists through their accompanying smartphones.

Pebble owners can choose from more than 8,000 compatible smartphone apps in the Pebble app store to customize their devices. Apps are available from brands including Jawbone, Misfit, ESPN, Swarm and Swim.com. Independent apps are also available.