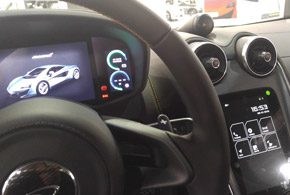 PHILADELPHIA—A wide range of automakers, from Chrysler to Chevrolet, Porsche, Fiat and Alfa Romeo, are integrating a new generation of in-car navigation and communications systems into their vehicles, bringing more convenience and safety features to the cars and trucks that consumers can buy and drive.

Many of the latest features, which are on display here at the annual Philadelphia Auto Show at the Pennsylvania Convention Center, were shown off on Media Day on Jan. 29, as reporters got the chance to see the systems up close in vehicles from low-cost economy cars to top-of-the-line luxury and sports cars. Here’s a sampling of the latest in-car features seen at the show.

One of the most intriguing new innovations is Chevrolet’s Teen Driver app in the 2016 Chevy Malibu, which allows parents of teen drivers to electronically set speed limits for the vehicles and shut down the vehicle’s sound system until the driver and passengers are buckled into their seat belts.

The system also prevents teen drivers from manually shutting off vehicle safety systems such as lane departure and forward collision warnings, while also advising parents when speed limits or other guidelines are violated.

The system works through the Malibu’s MyLink stereo system using a special key fob that must be carried by a teen driver.

Fiat is bringing back a beloved nameplate with its all-new 2017 Fiat 124 Spider two-door, two-seater sports car that has the spirit of the earlier generations of the 124 line while integrating a modern drivetrain and body. The inside of the 124 Spider looks like no earlier 124 ever did, with a 7-inch touch-screen display that is operated through a one-knob controller that lets users switch between navigation, music and other systems.

The upcoming 124 Spider is built on Mazda’s existing MX-5 platform along with all-new sheetmetal designed by a team in Italy. The car runs on a 1.4-litre, turbocharged four-cylinder engine that produces 160 horsepower and can be equipped with a six-speed automatic or manual transmission.

The latest Chrysler Pacifica minivan, which formerly was known as the Town & Country, gets larger 10-inch displays on the backs of the front seat headrests, as well as new touch-screen capabilities for the first time. Also new is wireless streaming direct to the displays from personal tablets or smartphones that are tethered to the system, giving users a wider range of entertainment options.

In addition, there is a new “Are We There Yet?” app available through the in-car entertainment system that works with the vehicle’s GPS system to show passengers where they are in real time as well as the vehicle’s route and estimated time of arrival. The app can help turn a long trip into a mapping and tracking adventure for young passengers by involving them more directly in the journey. “Are We There Yet?” works with the headrest-mounted displays available to second-row passengers.

The all-new four-door Alfa Romeo Giulia Quadrifiglio is a sports sedan heading to North America in the second quarter at a price starting at around $70,000. The Giulia has an integrated navigation, radio, media, phone and APS system that gives drivers control over communications and entertainment in this luxury sports sedan.

Starting at $184,500, the 2016 McLaren 570S (pictured) is an all-new mid-engine sports coupe that doesn’t skimp on its in-car communications and navigation features. The car boasts a vertically mounted touch screen on the dash to save space and includes apps, a Web browser, navigation, smartphone connectivity, weather information, streaming Bluetooth radio and Google Maps capabilities. The integrated Iris Infotainment System is designed by McLaren.