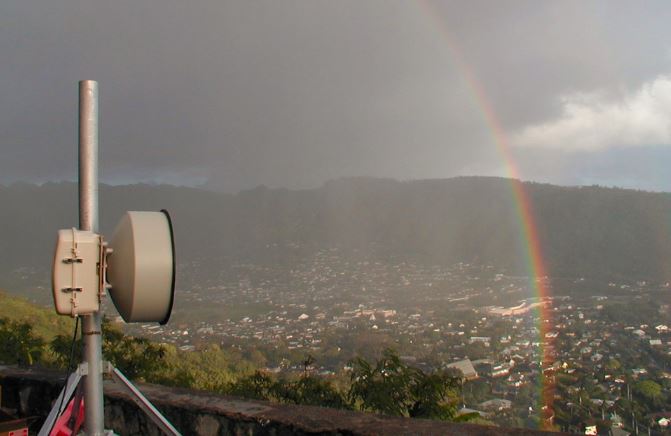 A new antenna design and an integral modem chip that will allow mobile users to communicate using millimeter wave technology is now in production, according to chipmaker Qualcomm.

Mohammed Al Khairy, Qualcomm’s Senior Manager of Modem Marketing, said July 23 that the new components are already in production, and that cellphone makers already have samples. The use of millimeter wave communications is critical to the plans for 5G communications by all of the major carriers.

Millimeter waves are called that because the radio wavelengths are only a few millimeters long. At these wavelengths, radio waves behave more like beams of light than they do the radio waves you normally experience. They bounce off hard surfaces, they can be blocked by a human body (because a body is mostly water), but they can also be tightly focused–and they can be aimed.

The short wavelength is due to the high frequency at which these waves are generated. 5G communications in the millimeter wave bands will operate at 28 and 39 GHz, where the wavelengths are between 8 and 9 millimeters. By comparison, FM radio operates at about 3 meters wavelength.

Good Opportunity to Use New Antennas

The fact that these radio waves bounce around so much is also an opportunity for some types of antenna systems, especially those that use MIMO (multiple in/multiple out) designs, in which the antenna system takes advantage of signals traveling over different pathways to enhance the radio signal that’s being received by the radio. This same technique is used in newer WiFi access points to help get rid of dead spots.

By having at least three of these modules, the antennas can be grouped into a phased array that will them support beam forming and focused reception. Because of the MIMO design, the device can make use of signals arriving from any direction, including being reflected off of a building, even if the cell antenna isn’t directly visible.

Because the millimeter wave components are already in the hands of phone makers, this means that the engineers at those companies will have the opportunity to design devices that can take advantage of 5G when the carriers deliver it. Al Khairy said that he expects to see phones and other devices with the new millimeter wave antennas and modems embedded in early 2019. Cell sites based on the same technology should be up and running, depending on the carrier, by the end of 2018.

Initially, Qualcomm’s millimeter wave package will handle wireless speeds up to 5 gigabits per second. But Al Khairy said that the company is already working on components that could deliver even higher speeds and offer some other features as well, although he declined to be specific about what’s coming with future products. Qualcomm did say in their press information that realistic speeds in the first mobile devices would be more like 1.6 gigabits per second.

One characteristic of millimeter wave radio that hasn’t been widely discussed is that it’s going to require a lot more cell sites than the carriers have now. Because of the relatively short range in the real world, millimeter wave cells will have to be close together, especially in the urban areas where the carriers are planning to put them.

While millimeter waves can cover longer distances in the right conditions, they can’t penetrate physical objects well, and that includes things like walls, but also foliage, and even people. During tests I ran at the University of Hawaii with Brian Chee, the lab director there, we could get ranges up to two kilometers using millimeter waves, but that was over empty space. Realistic expectations for the real world are more like a hundred meters or so.

This means you can expect to start seeing small cell antennas on everything from buildings to street signs as 5G expands. But the new Qualcomm antenna and modem pair can also do a lot to keep fixed operations, such as cell sites, from being too obtrusive because the antennas can be so much smaller. That will probably do a lot to help 5G communications expand.