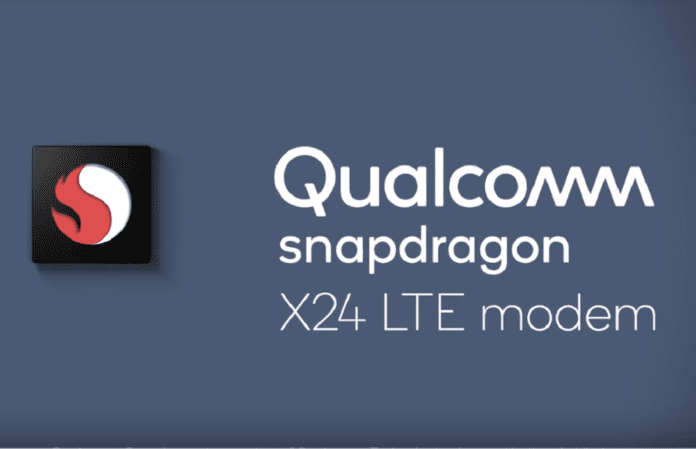 Qualcomm has announced its fastest LTE modem chipset, the new Snapdragon X24, which promises download speeds of up to 2 gigabits per second (Gbps) for mobile devices that incorporate them starting later in 2018.

The new LTE chipset, which is expected to be available in some smartphones and other mobile devices by the end of 2018, will be demonstrated at the upcoming Mobile World Congress (MWC) event in Barcelona, Spain, later in February.

The latest chipset offers twice the speed of Qualcomm’s first-generation Gigabit LTE modem, while supporting up to 7 times the carrier aggregation in the downlink. In addition, it supports 4×4 MIMO on up to five aggregated LTE carriers, for a total of up to 20 concurrent spatial LTE streams, allowing mobile devices to utilize all spectrum assets available from a mobile operator, according to Qualcomm.

With its faster performance, smartphone and other device makers will be able to offer consumers faster mobile experiences including immersive 360-degree video, connected cloud computing, rich entertainment and instant apps, according to Qualcomm.

Dan Olds, an IT analyst with Gabriel Consulting Group, told eWEEK that being the first vendor to announce a mobile chipset with 2 Gbps capabilities is “a big deal for the industry,” since it is almost twice as fast as the company’s most-recent hardware.

However, it will take time for mobile networks, mobile devices and other systems to catch up with the speed capabilities of the X24 modem, he added.

“How many users can actually take advantage of that speed is an open question due to bottlenecks on the carrier side, but faster is always better,” said Olds.

One of the X24’s biggest gains is that it can support up to seven aggregated LTE carriers, “which is way more than the three carriers supported in even the fastest U.S. networks” today, he said. “Think of this as lanes bringing data to your device—seven lanes are much better than only three lanes.”

Ultimately, “these types of advances move us down the road towards our glorious 5G future,” which promises performance that’s some 20 times faster than 4G, said Olds. “In real world use, the difference is probably going to be closer to a 10 times advantage for 5G, which is still an excellent advance in capabilities.”

Another analyst, Charles King of Pund-IT, called the Qualcomm announcement “strategically interesting, but also entirely predictable,” due to the expected heavy focus on 5G systems, hardware and potential at the upcoming MWC event. “Qualcomm is basically reminding people that it’s delivering substantial benefits to customers today and will continue to do so while moving toward next-gen technologies.”

The pre-MWC announcement could even be called “an unsubtle slap at those who are maximally touting 5G in spite of usable solutions being a couple of years away,” said King. “That also doesn’t address the fact that 5G’s sunny future will require wireless service providers to make substantial investments in and upgrades to their network infrastructures.”