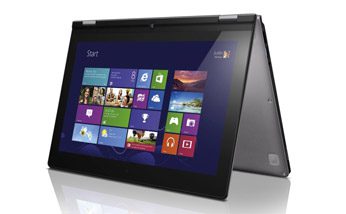 PC maker Lenovo is looking to make an acquisition, and BlackBerry-maker Research In Motion is among the companies it is considering.

“We are looking at all opportunities—RIM and many others,” Lenovo CFO Wong Wai Ming told Bloomberg during a Jan. 23 interview at the World Economic Forum meeting in Davos, Switzerland.

Lenovo has $3.6 billion in cash, and in a PC market hit hard by consumers’ affections for tablets, Lenovo is the only top-four PC maker that has managed to continue to grow. During the fourth quarter of 2012, it posted 8 percent year-over-year growth, while Hewlett-Packard, Dell and Acer posted losses of 0.5 percent, 21 percent and 11 percent, respectively.

In China, Lenovo also has a leading smartphone brand and successfully sells tablets, and has begun testing interest for these products elsewhere. In the United States, it has shown off an Android-running tablet, in addition to Windows 8 models, and earlier this month it launched six new smartphones, a mix of consumer- and business-geared handsets. Lenovo has said it will launch the phones in China before bringing them to “select global markets.”

BlackBerry maker RIM has made clear that it’s open to the ideas of selling off its hardware business, licensing its software or striking any deal in between what would best benefit its shareholders.

While RIM has hemorrhaged market share over the last few years, CEO Thorsten Heins, in a January interview with German newspaper Die Welt, pointed out that RIM is debt-free and has $2.9 billion in available cash—it’s not completely desperate yet.

Heins has also repeated—in Die Welt, as well as to eWEEK—that while RIM is investigating all options, it has no interest in moving on them until it launches its long-delayed BlackBerry 10 platform and smartphones and assesses the world’s response.

RIM plans to unveil BlackBerry 10 at a New York City event Jan. 30, and will soon after begin selling the phones—Heins has promised to include carrier launch information in RIM’s Jan. 30 announcements.

A potential obstacle to a Lenovo purchase of RIM could be the fact that while Lenovo is quick to present itself as a global company—its principal operations are in North Carolina, Singapore and Beijing—its roots are in China. While any company looking to buy RIM, whose products are used by U.S. government agencies and other regulated industries around the world, will be thoroughly investigated, a Chinese company controlling RIM would present particular security frictions.

Chinese telecom equipment makers Huawei and ZTE—which have ties to China’s government—have been investigated and criticized by U.S. lawmakers, who have warned that each presents possible “national security dangers.”

Michael Genovese, an analyst with investment firm MKM partners, told Bloomberg that the terms of a Lenovo purchase could help to appease lawmakers.
“If the key intellectual property and software is being kept in Canada,” said Genovese, “I think the government would sign off on a deal for just the hardware.”