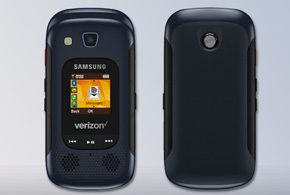 Samsung’s latest Convoy 4 rugged flip phone, which the company built for enterprise workers who do their jobs in challenging environmental conditions, is available immediately, exclusively through Verizon Wireless.

The $192 handset is the latest entry in the rugged mobile marketplace, which offers phones for workers in construction sites, warehouses, factory floors and other extreme environments where water, dirt and dust can be present.

The Samsung Convoy 4 features a 2.4-inch QVGA color display (240-by-320) on the inside of the flip phone and a 1.3-inch TFT color display on the outside of the handset, 512MB of onboard storage, a microSD slot that accepts additional storage of up to 32GB, and a 5-megapixel camera with autofocus, flash and video recording capabilities, according to Verizon.

It also includes 3G and Bluetooth connectivity and meets IP67 and U.S. military MIL-STA-810G specifications to withstand water, dust, shock, and high or low temperatures, allowing the device to be submerged in 39 inches of water for up to 30 minutes without damage.

The handset, which is not a smartphone, also includes a 1,300mAh Li-Ion battery that promises up to 8 hours of talk time, dual microphones and noise-canceling technology that blocks out background noise around users.

The Convoy 4 has a curved keyboard and a programmable function key. It is a quad band GSM device that allows global roaming in more than 200 countries.

Measuring 4.26 inches long, weighing 5.82 ounces and available in blue, the phone can be purchased from Verizon for zero down and $8 a month for 24 months on an installment payment plan. An optional holster and a fitted case are available separately for $19.99 each. The phone comes with a USB wall charger and a battery removal tool.

The flip phone also includes Push to Talk (PTT) technology, a service that will be available to users through a future software update, according to Verizon. PTT lets users push a button to operate the phone using instant conversations, like they were using a walkie-talkie. The PTT function will allow group calls with up to 250 participants when the feature is enabled in the future.

Samsung has previously offered three earlier versions of its ruggedized Convoy phones, as well as ruggedized models in its smartphone line, including the Galaxy S6 Active in 2015, according to an earlier eWEEK story.

In March, reports surfaced that Samsung may be preparing to launch a new Galaxy S7 Active smartphone based on its latest Galaxy S7 and S7 Edge flagship smartphones. The Galaxy S7 and S7 Edge are already water-resistant and dust-resistant, but lack the military-grade drop, shock and dust resistance that are typically featured in the company’s Active products. Samsung’s earlier Galaxy S5 smartphone was water-resistant, but the feature was dropped for the S6 and S6 Galaxy in 2015. None of those three phones are dust-resistant.

The original Galaxy S6 Active smartphone was unveiled by Samsung in mid-2015 and was offered in the U.S. by AT&T, according to an earlier eWEEK story. The S6 Active was built for smartphone owners who are tough on their phones. The handset is water-resistant down to 5 feet for less than 30 minutes. The phone model includes an IP68-certified casing that creates a phone that active consumers can use safely, even when exposed to harsh conditions. The Galaxy S6 Active— available from AT&T in camo white, camo blue or gray for $695—has 32GB of storage.

Rugged enterprise mobile phones and tablets are also offered by Kyocera, Caterpillar by Bullitt Mobile and others.