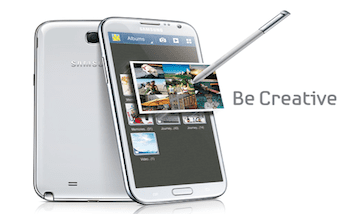 AT&T took a break from selling record numbers of iPhone 5 smartphones to announce that later this year it will begin selling four additional LTE-enabled, Android-running smartphones from Apple competitor Samsung.

While dates and pricing details are also still to come, Samsung and AT&T said Sept. 28 to expect the Samsung Galaxy Express, the Galaxy Rugby Pro, the Galaxy Note II—which on Sept. 27 went on sale in select markets abroad—and the Galaxy Tab 2 10.1.

The Galaxy Express is the starter smartphone of the lot, according to Samsung, which could say more about pricing than specs. It pairs a 4.5-inch Super AMOLED (active-matrix organic LED) Plus display with a 1.5GHz processor, a 2,000mAh battery and Android 4.0 (Ice Cream Sandwich). There’s also a 5-megapixel rear-facing camera and, again, access to AT&T’s speedy Long-Term Evolution (LTE) network.

The Galaxy Rugby Pro is intended for users inclined to toss their phone into a truck with their tools. It meets military specifications for dust, water and shock resistance—AT&T points out that it’s not intended for in-water use but is waterproof against spills and splashes when the ports are covered—and features a 4-inch WVGA Super AMOLED display. There’s a 5MP camera on the back with the ability to record high-definition video in 720p, and it will come with full device encryption and Exchange ActiveSync (EAS) corporate email support.

In November, AT&T will begin offering Enhanced Push-to-Talk services, and when it does, the Rugby Pro will be capable of accessing them. The services will include the ability to call up to 250 people with the press of a button, a real-time view of who’s available to talk, and the ability for supervisors to override PTT calls in progress to convey urgent news.

The Galaxy Tab 10.1 is the Note’s larger, no-doubt-a-tablet cousin. It features a 10.1-inch display, a serious 7,000mAh battery for all-day use, front and back cameras, Android Ice Cream Sandwich and, again, access to AT&T’s HSPA+ and LTE 4G networks.

Samsung shipped 50.5 million smartphones during the second quarter, according to Strategy Analytics, grabbing a record 35 percent share of the global market.

“This was the largest number of units ever shipped by a smartphone vendor in a single quarter,” Strategy Analytics said in a July report. “Samsung has been able to deliver hit models in most major price segments, from the high-end Galaxy Note phablet to the mass-market Galaxy Y.”

Apple, ahead of its iPhone 5 launch, shipped 26 million smartphones during the quarter—up from 20.3 million during the same quarter the year before—for a performance that the research firm called “lackluster” and blamed, in part, on Apple fans holding off iPhone purchases in anticipation of the iPhone 5.

In the first three days the iPhone 5 was available for preorder, Apple sold 5 million.

AT&T, while it didn’t share figures, said in a Sept. 17 statement that it sold more iPhone devices “than any previous model, both on its first day of preorders and over the [sales] weekend.”