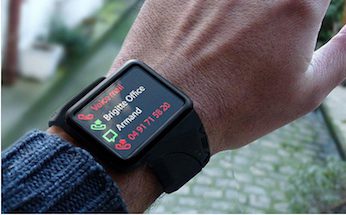 Samsung and Apple have been doing battle in the smartphone and tablet markets, and it’s expected that someday they’ll square off in the television and watch categories as well.

Samsung has confirmed that it is indeed working on a smartwatch.

“We’ve been preparing the watch product for so long,” Lee Young Hee, executive vice president of Samsung’s mobile business, told Bloomberg during an interview in Seoul, according to a March 19 report.

“We are working very hard to get ready for it,” he added. “We are preparing products for the future, and the watch is definitely one of them.”

Lee didn’t say when the watch will be available, the price point Samsung is aiming for or whether the watch will run Android, the mobile OS that runs on Samsung’s successful line of Galaxy devices.

Citigroup analyst Oliver Chen has pointed out that the goal is to create, as Apple did with the iPod, a totally new device that consumers didn’t know they needed, and suddenly desperately want.

While Apple has been reported to be working on a watch—a claim it has not acknowledged, nevermind confirmed—Samsung has given the rumor drivers more to work with. At the 2013 Consumer Electronics Show in January, Samsung-owned Samsung Display showed off a 5.5-inch, 1280-by-720-pixel bendable display.

The company said in a July 2012 statement that it is “destined to attain virtually unlimited growth.”

The world’s leading smartphone makers may have at one time felt the same way. But with the market nearing saturation, the companies are looking for the next big thing. Bloomberg points out that Apple recently posted its slowest sales growth in more than two years, and that while 2013 will post 27 percent growth, by 2017 that will slow to below 10 percent.

The industry has had plenty of hints that watches, an industry slated to bring in $60 billion in sales this year, might be it.

Designers have been creating wristbands for the iPod Nano since Steve Jobs introduced it in 2008, and in April 2011 Pebble Technology became Kickstarter’s then most highly funded project, after supporters promised $10 million to develop a watch with an e-paper face that could connect to an Android or iOS device using Bluetooth.

With apps, the Pebble’s appearance and capabilities can be customized by users.

Apple is said to be working with Intel on a Bluetooth-enabled device with a 1.5-inch organic LED display, a Chinese Website reported in December 2012.

By February, The New York Times, The Wall Street Journal and Bloomberg were reporting much the same and saying that Apple partner Foxconn will manufacture the watch.

Samsung and Apple should have plenty of competition in the space, from both fellow smartphone makers (in 2010 Nokia filed a patent for a flexible device that can be bent into a shape like a wrist cuff, a soup can or an A-frame tent) and companies with competing devices to complement Samsung’s and others’ smartphones.

French company VEA Digital, for example, has paired with watch-focused design company Caiman Design to create the VEA Buddy, a Bluetooth watch with a 2-inch-wide color touch-screen, 8GB of memory and 10 days of battery life (according to VEA).

“We wanted to do a very simple, efficient product with a specific user interface,” Armand Billard, founder and general manager of Caiman Design, told eWEEK. “It’s good for the eyes, not too big on the wrist, with good battery life.”

Billard said they knew they had something good on paper, and the early response to its crowd-funding efforts have proven it right.

“This is amazing,” said Billard. “It’s a great comfort to us to see that people agree we have something great.”