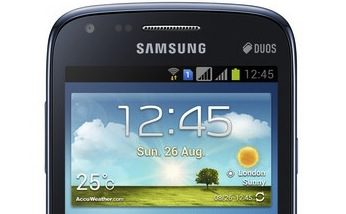 Consumer electronics giant Samsung is having a busy year building out its universe of Galaxy mobile devices and has enlarged the family further with the release of the Galaxy Core.

The smartphone is designed to offer users dual-core processing power for multitasking, dual SIM technology and a host of smart features such as S Voice, which provides voice-command functionality.

The smartphone is equipped with a 1.2 GHz dual core processor and supported by 8GB of internal memory and 1GB of random access memory. The display is a lower-end 4.3-inch WVGA (480 x 800) screen, and the handset also features a 1,800mAh battery for extended usage and a 5-megapixel camera.

Running Google’s Android operating system version Jelly Bean with Samsung’s TouchWiz interface layered on top, the Galaxy Core also provides Galaxy-specific features such as Smart Stay, which recognizes when a user is looking at the phone and saves battery life when a user looks away by dimming the screen and powering down using advanced facial recognition, and Smart Alert, which alerts the user to missed calls and messages when the device is picked up.

The Galaxy Core will be available in two different versions, a single SIM from July or dual SIM from May, depending on the market. The phone’s features are supported with Dual SIM technology, which enables users to access both SIM cards simultaneously. Rounding out the package is software that allows users to activate common functions such as refresh or mute with simple motion commands.

At the end of April Samsung introduced another member of the Galaxy family, the Galaxy Tab 3 tablet, which runs Google’s Android Jelly Bean 4.1 operating system and boasts a 7-inch display. The device, which is powered by a 1.2GHz dual-core processor, comes with either 8GB or 16GB of internal storage, plus up to 64GB of expandable memory. It also comes with both a 3-megapixel rear camera and 1.3-megapixel front camera. Plus, the design features a thinner bezel than its predecessor, the Galaxy Tab 2.

Both of these releases follow Samsung’s flagship smartphone debut for 2013, the Galaxy S 4 smartphone, which is viewed as the strongest competitor to the Apple iPhone. Samsung and Apple are currently fighting for world smartphone market share supremacy. When it comes to upgrading their smartphone, an April survey from BuyVia found that 41 percent of consumers want the next iPhone, while 19 percent want the recently released Samsung Galaxy S4.

Of those who purchased a Samsung smartphone in the last year, more than half (52 percent) purchased a Galaxy S3, 21 percent a Galaxy S2 and 5 percent a Galaxy Note 2. And compared with purchasers of other brands, Samsung purchasers were more likely to cite “handset cost” and “carrier brand” as key drivers, an April report from Kantar Worldpanel ComTech found.