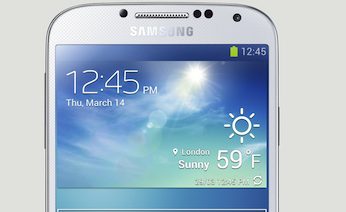 Samsung took its best swing at Apple on March 14, introducing the Galaxy S IV at Manhattan’s Radio City Music Hall. It was Samsung’s first Galaxy S phones to be unveiled in the United States—a key market for winning the lucrative high-end smartphone race.

The S IV, as the rumors foretold, includes a 5-inch display, an eight-core processor, Android 4.2.2, a 13-megapixel back camera and more of the eye-watching features that slightly weirded-out U.S. consumers on the Galaxy S III (a Samsung executive, shortly after that phone’s debut, conceded that market testing suggested it was better to emphasized the S III’s sharing technologies than its ability to watch users).

But that’s far from all that the S IV boasts. It’s as packed with features as Samsung’s presentation (there was dancing and a full orchestra) and press release were packed with hyperbole and Hello Kitty-like sayings. The S IV, according to Samsung, is “designed to get you closer to what matters in life and bring your world together.”

Another gem: “Understanding what matters most to us in our lives, the Samsung Galaxy S IV was developed to redefine the way we live and to maximize our fulfillment of life.”

The display is covered with Gorilla Glass 3 and has a resolution of 1920 by 1080, for 441 pixels per inch, which is as far as the envelope can be pushed—the human eye can’t discern anything more. It’s the same (incredibly gorgeous) resolution as is on the HTC Droid DNA—a phone that struggling HTC introduced back in November 2012.

The Galaxy S IV will begin rolling out in April, for $199 with a two-year contract, from Verizon Wireless, AT&T, Sprint, T-Mobile, US Cellular and Cricket. It will initially be available in white and gray, with more colors to follow.

The rest of the S IV’s features can hardly be crammed into a single article.

There’s a dual camera function, in which the front and rear cameras—in literally eight different scenarios—can be used at the same time. A Dual Video Call function enables users to make a video call while showing the person on the end of the call what the user sees (Nokia offered this feature back in 2005, calling it “See What I See”).

There’s a Group Play feature that enables a user to share music, without a WiFi or cellular signal, with other phones around them, to create a fun little dance party.

An S Translator provides instant translation, via text or voice; an S Voice Drive, enables users to voice control the phone, while driving; and new S Health software uses the phone’s built-in sensors to “systematically and automatically [monitor] your health, surroundings and so much more to help improve your quality of life.”

Regarding Samsung’s the-phone-is-watching-you technologies, a Smart Pause feature will pause a video when it senses that the user has looked away, and a Smart Scroll feature will scroll the browser or emails up and down without having to be touched—it watches the user’s eyes to see where she or he is on the screen.

There’s also a hovering feature that detects a finger without said finger needing to touch the display—and really so much more.

The Associated Press, which was among a handful of media outlets to try out the phone in advance, said that new users may be “confused” by some of the S IV’s features, which are inconsistently deployed. The finger hover, for example, works with the email app but not the Gmail app.

“The built-in ‘Gallery’ app will show picture previews, but the ‘Gmail’ app won’t. I suspect users will get tired of trying to hover their fingers and give up on the whole thing,” Peter Svensson wrote in a March 14 report.

Research firm Strategy Analytics, in a blog post following the event, said that Samsung has clearly “worked hard on its software and the results are impressive.”

The firm, which also spent time with the smartphone ahead of its debut, expects Samsung to ship tens of millions of them worldwide this year. It added, “provided there aren’t major ‘hidden’ bugs that become apparent after launch, the S IV will be another blockbuster product for Samsung.”